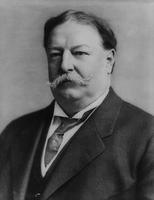 Inaugural Address of William Howard Taft. This is the text of the speech that President Taft delivered when he was sworn in as President on March 4th, 1909.

Anyone who has taken the oath I have just taken must feel a heavy weight of responsibility. If not, he has no conception of the powers and duties of the office upon which he is about to enter, or he is lacking in a proper sense of the obligation which the oath imposes.

The office of an inaugural address is to give a summary outline of the main policies of the new administration, so far as they can be anticipated. I have had the honor to be one of the advisers of my distinguished predecessor, and, as such, to hold up his hands in the reforms he has initiated. I should be untrue to myself, to my promises, and to the declarations of the party platform upon which I was elected to office, if I did not make the maintenance and enforcement of those reforms a most important feature of my administration. They were directed to the suppression of the lawlessness and abuses of power of the great combinations of capital invested in railroads and in industrial enterprises carrying on interstate commerce. The steps which my predecessor took and the legislation passed on his recommendation have accomplished much, have caused a general halt in the vicious policies which created popular alarm, and have brought about in the business affected a much higher regard for existing law.

To render the reforms lasting, however, and to secure at the same time freedom from alarm on the part of those pursuing proper and progressive business methods, further legislative and executive action are needed. Relief of the railroads from certain restrictions of the antitrust law have been urged by my predecessor and will be urged by me. On the other hand, the administration is pledged to legislation looking to a proper federal supervision and restriction to prevent excessive issues of bonds and stock by companies owning and operating interstate commerce railroads.
Posted by M at 5:23 AM