And Ulysses S. Grant helped preserve our young nation’s very existence by vanquishing the Confederacy while drinking enough whiskey to... 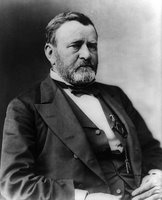 While doing some research on President Grant yesterday, I came across this quote from Modern Drunkard Magazine:

And Ulysses S. Grant helped preserve our young nation’s very existence by vanquishing the Confederacy while drinking enough whiskey to flood the Potomac.

I knew that Grant had a drinking problem. However, was he really that much of a drunk during the Civil War?

The same magazine also noted this:

A perpetually loaded General Ulysses S. Grant saves the Union from destruction. President Lincoln, when informed that General Grant preferred to guzzle whiskey while leading the troops, replies, "Find out the name of the brand so I can give it to my other generals."

I realize that Modern Drunkard Magazine is not a good source for accurate facts but can anyone recommend any good sources for Grant and his drinking during the Civil War? A quick search at the library here turned up very little.
Posted by M at 12:41 PM

Shelby Foote, The Civil War, vol. -2, pg. 117: "The evidence is conflicting. Some said the general never touched a drop, others declared that he was seldom sober; while still others had him pegged as a spree drinker." There are quotes and evidence around it that go both ways. But that's a good place to get both sides of the story. So it sounds like you could go either way depending on the evidence you used - hence Modern Drunkard probably just uses the bad.

I have always heard that he was worst when Julia wasn't around and if she was around, he didn't drink. "It was widely believed that her husband, especially during his career as a soldier, was much too fond of whiskey, and that the cure consisted of bring Mrs. Grant to camp; in her presence, it was held, he instantly became a teetotaler." (introduction to the memoiors of Julia Grant which was written by Bruce Catton, pg. 1) Julia Grant actually was in his various camps regularly, so he was probably only at his worst if she hadn't been there in awhile.

Thanks for the citations and quotes. I do find this useful.

Since the evidence is split, I have to assume there was some drinking going on by Grant during the Civil War. How much though...

In Ulysses S. Grant: The Unlikely Hero by Michael Korda there is a convincing argument made that drinking destroyed Grant's pre-Civil War military career. As drinking problems rarely go away completely, and there was no AA then, it is likely that the drinking continued during the war.

And if you send thousands of men to their death for the greater good, would Grant have felt the need to get comfort from the bottle? Probably.

Thanks again for the information.

Take a look at McFeely's bio of Grant. If memory serves, McFeely argues that there is little hard evidence that Grant drank much at all during the war

After examining a large portion of the historical notes on the subject, the prudent approach would be to admit that Grant drank. One can point to two points in time in particular where trying to portray Grant as innocent stretches credulity.

The first was the period of time during which Grant 'voluntarily' resigned his commission. The second is the infamous "Yazoo River Bender".

Grant's reputation was attacked from all sides, and alcohol was the convenient excuse. Many southern sympathizing newspaper editors and reporters all over the country wrote scathing articles attacking Grant with charges of alcoholism drinking and every other foul charge they could dream up. Grant was also attacked by many in political circles who attacked Grant in hopes of further the careers of their own proteges in an attempt to further their own careers. In a lot of ways this actually worked in his favor in that the subject of whether or not Grant had a drinking problem kept his detractors from fabricating other charges which might have harmed him much worse.

By definition, Grant was definitely not an alcoholic. There is plenty of evidence that he was in no way addicted, and would spend months and years at a time without touching a drop. The fact that Grant was never seen drinking during times of crisis or when he was actively working speaks volumes about his approach to alcohol.

Outside of 'social drinking' which Grant did sparsely and rarely to excess, he would turn to the bottle for extended periods when he was either extremely lonely (as as the case in California) or when the situation allowed him a bit of downtime for relaxation and he could "take a vacation for a bit to party and unwind from all fo the stress" as seemed to be the case during the "Yazoo River" incident.

That Grant was a military genius is certain. That he posessed an ability to boiled down complicated situations to their essence and draw out startlingly accurate conclusions also sets him apart. Despite these traits Grant can also be accurately described as a common man, average in almost all ways for his time and society. His drinking can certainly be described in these terms as well.