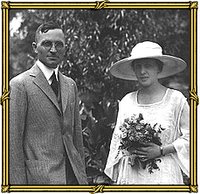 Great Romances - The Trumans. I know I am a few days late for Valentine's Day but I enjoyed reading this and thought I would highlight it anyway.

This is a nice article on the relationship between President Truma and his wife Bess. It started in Sunday School at the age of six...

He first saw her in Sunday school when he was six years old and she was just five. "She had golden curls and beautiful blue eyes," he recalled. They graduated from high school together in 1901, but went their separate ways -- he moved to Kansas City and she to Colorado for a year -- until becoming reacquainted nine years later. It was then that Truman, who once wrote of Bess, "I thought she was the most beautiful and the sweetest person on earth," began his first and longest campaign -- to win the heart of Bess Wallace.

Bess lived in her family home in Independence, Missouri. Harry was a hard-working farmer from Grandview, twenty miles away. So he courted her, in part, by mail. Their correspondence would continue for nearly fifty years -- an exciting ride through nine years of courtship, fifty-three years of marriage, family, career changes, and political fortunes that thrust them to the very center of the world stage. More than 1300 letters from Harry to Bess Truman survive in the Truman Library collections.

Sadly, most of her letters to him have been lost to history. After showering Bess with attention and letters for more than a year, Harry proposed to her in 1911, but she turned him down. He persisted, and eventually she fell in love with him. He had a standing invitation to dinner at the Wallace home on Sundays, often sleeping across the street, afterwards, on the floor of his cousins' house because travel between Grandview and Independence was arduous. To win her favor -- she was from a wealthy family -- and better his prospects, he entered into a series of business ventures -- mining, drilling for oil, and other speculations -- most ending in disappointment. Although he also served as Grandview postmaster and as a county road overseer, his future remained uncertain
Posted by M at 10:55 AM

Some other great love affairs from our presidents:

John and Abigal Adams: She wrote to him in July of 1755 that she need "sentimental Effusions of the Heart" in his letters because she was lonely. (butterfield, book of abigail and john, 101) They wrote to each as Diana and Lysander. (butterfield)

Julia and Ulysses Grant: He wrote her from the battlefield of the Mexican-American War that he "loved her constantly" since the first. (Jean smith, grant, 58) She recorded in her autobiography that he wouldn't hear of her having surgery on her eyes (she was cross-eyed) because he had fallen in love with her eyes the way they were. (julia grant, 127)

Helen and Will Taft: He wrote her in June of 1891 that "I love you fondly dearly my own darling." (papers of william howard taft, series 2, LOC microfilm) That letter has lots more, but that's enough for now.

I could come up with more, but that's enough for now....