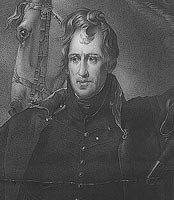 The 1828 Campaign of Andrew Jackson and the Growth of Party Politics. This is a curriculum plan from EDSITEment and the National Endowment for the Humanities on the election of 1828. The introduction notes, "In this unit, students analyze changes in voter participation and regional power, and review archival campaign documents reflecting the dawn of politics as we know it during the critical years from 1824 to 1832."

There are four lessons in the unit:

Lesson One: Expansion of the Voting Base Before and After 1828

Lesson Three: Territorial Expansion and the Shift of Power

Lesson Four: Issues in the Election of 1828 (and Beyond)

There is also a good collection of links which teachers could use to help teach about this topic with each lesson.

I think this might be a great topic to teach at the primary, secondary, and post-secondary level. A great deal of this unit deals with the expansion of the franchise (voting) and how this changed the nature of national politics. It brings up good questions like:

Was the voting more fair in 1828 even if women and non-whites were not allowed to vote?

Is an election fair even if only a small number of people may participate?

Is the Electoral College a fair method of deciding an election?

This entire topic also might be helpful in teaching about women's suffrage and the 15th Amendment as well. There are a lot of good ideas here and I think American history teachers at all levels may find good inspiration here. Also, elementaryhistoryteacher has a recent post relating to this as well at http://american-presidents.blogspot.com/2006/03/tale-of-four-favorite-sons.html.
Posted by M at 12:41 PM

I like your extension ideas. I think an important issue to discuss is how few people today vote. Yet everyone is a critic of the government. We need to train our youth to take action in government - even if all they ever do is vote, they are still doing more than most Americans today.