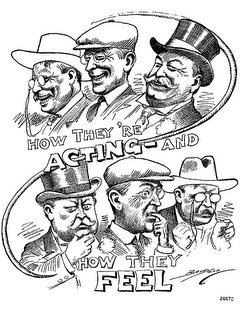 Candidate number one, Woodrow Wilson, was a former Princeton president and had served as New Jersey’s governor. Wilson had catapulted to state and national political levels due to the assistance of the New Jersey political machine. He had surprised many, however, when he had announced that if elected governor he would not be controlled by any special interest groups. Under Wilson, New Jersey became a model of Progressive reform. Election laws were improved, military regularity boards were established and cities were allowed to change to commissioner forms of government.

William Howard Taft, the incumbent, had been elected in 1908 largely in part due to the support of Theodore Roosevelt. Taft had served in Roosevelt’s administration as a judge, governor of the Philippines, and as Roosevelt’s Secretary of War. The American Heritage Pictorial History of the Presidents of the United States relates the following events:

One evening in January 1908, President Theodore Roosevelt sat chatting with Secretary of War William Howard Taft and his wife, Nellie, in the second-floor White House library. The mood was relaxed. Seated comfortably in his easy chair, Roosevelt was talking about a subject he had often discussed with his guests: the future role of Taft. Roosevelt toyed with a couple of options. “At one time it looks like the presidency,” he mused, considering a role for his future lieutenant, “then again it looks like the chief justiceship.”

The Tafts knew that Roosevelt had the power to bring about either of these options. “Make it the presidency,” interrupted Nellie Taft, always ambitious about her husband’s career. Taft himself was less convinced that he would make a good chief executive. “Make it the chief justiceship,” he uttered.

In the end, Taft bowed to the wishes of his wife and his boss. Following George Washington’s example and honoring his own promise in 1904, Roosevelt decided not to seek reelection in 1908. Instead, he endorsed an experienced administrator and moderate progressive to run for president on the Republican ticket: William Howard Taft.

Taft probably should have listened to his own heart and spoke up for a position on the Supreme Court. Several days after taking the oath of office Taft wrote to Theodore Roosevelt that when the words, “Mr. President” were spoken Taft was still in the habit of looking around for Theodore Roosevelt.

Taft never quite lived up the ideal replacement for Theodore Roosevelt. Progressives soured on him rather quickly. He angered many with his position on the Payne-Aldrich Tariff Act and Taft had a different take on “trust busting” that the larger than life Roosevelt.

Theodore Roosevelt became the third candidate for the Election of 1912 and attempted to gain the Republican nomination away from Taft. When Taft was declared the nominee Theodore Roosevelt declared he was “fit as a bull moose” and a new political party was born. At this point it can be correctly predicted that Republican votes would split between the Republican nominee, Taft, and the Bull Moose Party nominee, Roosevelt. Taft was quickly jostled back to the third position as the national focus remained on Roosevelt and Wilson.

Roosevelt’s platform was called New Nationalism. The basics were a stronger national government with more powers for the executive branch to regulate trusts, legislation to protect women and children in the workforce, worker’s compensation for those injured on the job, and the formation of a Federal Trade Commission to regulate industry.

Wilson and the Democrats countered with their platform called New Freedom which mainly focused on Roosevelt’s plan for trusts. The Democrats argued that Roosevelt simply wanted to regulate monopolies while they wanted to eliminate them completely. The Federal government would have to much power if Roosevelt was allowed to have his way.

The split in the Republican Party did cause a split in the vote and predictably Wilson won the presidency. Woodrow Wilson received 435 Electoral Votes while only receiving 42% of the popular vote.

The Election of 1912 was the first time since Grover Cleveland in 1892 that a Democrat became president.
Posted by EHT at 8:01 AM

um. so you know how many ballots were cast before nominee was declared?