I found it interesting that there have only been a few US naval ships named after First Ladies. The Lady Washington (named after Martha Washington) seems like an obvious choice. The Roosevelt named after Franklin and Eleanor Roosevelt also was predictable. But the Harriet Lane? The USS Harriet Lane was a revenue cutter and launched in 1857. The boat saw action in the US Civil War on both sides of the war (yes, I meant to say that…you’ll have to go red the article to see how that happened!). 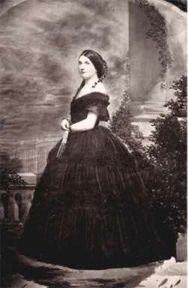 Harriet Lane served as White House hostess for her uncle, President James Buchanan, the only bachelor ever elected President. Ms. Lane was an accomplished hostess who was her uncle’s hostess throughout his career. Before the White House she traveled with him to England when he was appointed Minister to Great Britain. She was even successfully presented to Queen Victoria. The National First Ladies’ Library biography called her “young, beautiful, and extremely popular.” One of her biggest mistakes as First Lady was actually aboard the USS Harriet Lane, where she hosted a party that her uncle later berated her for since the boat was government property. Harriet Lane made many contributions including (these and many more can be found by following the link above):

So now that you know the First Ladies who have naval equipment named after them - who else do you think should be so honored?

Maybe a USS Lemondae Lucy? No drinks allowed onboard of course!

Also, Dolly Madison deserves a ship. She saved so much when the White House burned.

The USS Dolley Madison definitely has a good ring to it. She did so much to define the role of the First Lady, as well as her heroics to save the relics from the White House in 1814.

Maybe the USS Edith Wilson as well...after all, she practically was the President!