Does the Man Make the Name or Does the Name Make the Man? 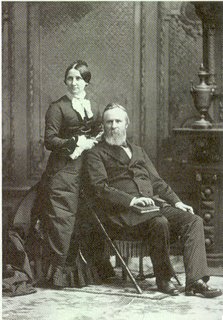 I guess every president needs some type of hobby, but I was most impressed to find out that Rutherford B. Hayes had a hobby that not only served a personal purpose but many people today use the Hayes Presidential Library to access many of the books the library contains regarding genealogy and local history of the area surrounding Fremont, Ohio.

The Hayes Presidential site gives some insight into how serious President Hayes was about his hobby by posting excerpts from his personal journal. Here’s a taste:

"I have always thought of myself as Scotch, but of the fathers of my family who came to America about thirty were English and two only, Hayes and Rutherford, were of Scotch descent. This, on my father's side. On my mother's side, the whole thirty-two were probably all of other peoples beside the Scotch.

Again, I have been proud of my descent (not very of course, only a trifle so,) from the famous Rutherfords; but it is plain that the brains, energy, and character possessed by my grandfather's children and grandchildren-- by the children and grandchildren of Rutherford Hayes--are mainly derived from our plain ancestor, whom [who] Uncle Sardis says was the homeliest woman he ever saw (!), Grandmother Chloe Smith.

I have been digging into Savage and other books on genealogy during the last week. I trace my lineage up almost to the Mayflower but not yet into it. I have only run back on the line of my father's side of the house, and the important family of the Smiths is left out!! Almost one-half of the stock! To be exact, it leaves out exactly one-fourth of the stock, as I find nearly one-half of the Smiths.

Now, the new idea I get by this study is, how futile it is to trace one's descent from a distinguished name in the past. Two hundred and thirty or forty years ago my ancestors were from thirty to a hundred different persons. The Hayes or the Rutherford of 1625 was only one out of forty or more who are equally my ancestors. What does it signify that John Russell was able and pious in 1640? I am but one part in forty to sixty of his blood. We attach more importance to the deeds of ancestors of our own names. But this is a mere figment of the imagination. I am just as much a Trowbridge, referring now to the Thomas Trowbridge who founded the family in New Haven in 1640, as any of those now living there who bear his name. The blood, the physical, mental, or moral qualities which distinguished an early "father," do not follow the name; do not accompany it."

It would seem that even in the late 1800’s it was difficult to find correct documentation for family research. I agree with his last observation. It’s very easy… yet dangerous… to attempt to link yourself to an important person with the same last name thinking that some of their greatness may rub off on you simply because you share a name.

I am just as much a Trowbridge, referring now to the Thomas Trowbridge who founded the family in New Haven in 1640, as any of those now living there who bear his name.
The blood, the physical, mental, or moral qualities which distinguished an early "father," do not follow the name; do not accompany it."
______

It seems that in as far the descendants of Thomas Trowbridge are concerned, for several centuries, members of that family have honored the name with those very qualities.