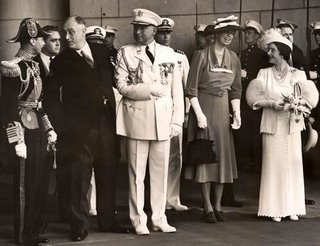 So did Eleanor really serve the king and queen of England hot dogs? Yes, she actually did, although she served a variety of items at this picnic-style lunch. And while the press made much of this, the king and queen were very impressed by Eleanor and Franklin Roosevelt and even the menu choice. The Queen wrote to Eleanor in 1941 to say just that:

We look back with such great pleasure to those lovely days we spent with you last June. We often talk of them, and of your & the President's welcome & hospitality. The picnic was great fun, and our children were so thrilled with the descriptions of the Indian singing & marvelous clothes - not to mention the hot dogs!

This visit began a good relationship (this was the first time a British royal had ever visited the US) between these heads-of-state that helped lead to the important alliances of the Second World War: “Britons were no longer strangers or the evil colonial rulers from the past but familiar friends and relatives with whom Americans could identify.” The site that I linked (the FDR Library) includes many letters between the English royals and the Roosevelts. In the same letter from above Queen Elizabeth (not the current queen, but her mother) writes of the response of the US population to the English war effort:
I must tell you how moved I have been by the many charming, sympathetic, and understanding letters which I have received from kind people in the United States. Quite poor people have enclosed little sums of money to be used for our wounded, our sailors, or mine sweepers. It really has helped us, to feel such warmth of human kindness & goodness, for we still believe truly that humanity is overall.
This visit also discussed more “political” topics as well. You can read George VI’s notes on talking to FDR and see that the US was already taking an active war interest at this point. So you can see that this visit, while often reduced to hot dogs, was a very important occurrence.
Posted by Jennie W at 8:27 AM

I think hot dogs were a great choice! It is very American.