This article is a lot of fun, which little vignettes about various First Ladies and the powers they had. For instance, it includes this bit about our “presidentress,” Edith Wilson: 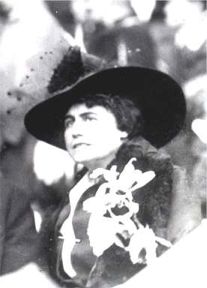 PRESIDENTRESS: From the get-go, Edith Wilson, who married the widowed president after a whirlwind romance in 1915, blurred the line between the personal and the political, says Phyllis Lee Levin, author of Edith and Woodrow: The Wilson White House. The president himself was complicit, teaching her secret codes so she could help him read and respond to classified messages in the run-up to World War I. On the positive side, Mrs. Wilson worked with the Red Cross, volunteered at military canteens, and even let sheep whose wool would be used for uniforms graze on the White House lawn. But her single-minded devotion led to a monumental misjudgment in the wake of her husband's massive stroke of Oct. 2, 1919, Levin believes. Insisting that the incapacitated president could still govern, Mrs. Wilson (with the backing of the president's physician) resisted any suggestion that her husband yield to the vice president. She assumed the role of gatekeeper, funneling to him only those issues she deemed important enough for him to attend to and severely limiting access by his cabinet and members of Congress. Mrs. Wilson claimed she merely carried out her husband's wishes; Levin disagrees. "It was a great deception," she says. "For many months, we didn't really have a president; we had her." Historians continue to argue about the extent of power wielded by the "lady president."
Posted by Jennie W at 5:33 PM