Franklin Pierce and the Mexican-American War 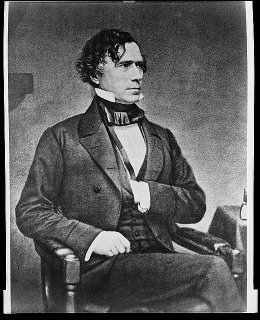 While doing some reading on the Mexican-American War, I rediscovered that Franklin Pierce had served in the war. He rose to the rank of Brigadier General of volunteers and took charge of a reinforcements which aided Winfield Scott who was marching on Mexico City. During the war, he was seriously injured when he fell from his horse.

Overall, Pierce played a minor role in the war. However, his actions during the war became huge a few years later when he ran for President in 1852. His opponent was none other than General Winfield Scott who he had served under during the conflict.

During the election, rumors spread that Pierce had been injured during the war because he had been cowardly under fire. To counter this, Pierce's friend Nathaniel Hawthorne wrote a biography titled The Life of Franklin Pierce. It was written to portray Pierce in a good light and it was widely distributed during the campaign.

Two of the seven chapters deal directly with Pierce and his experiences during the war. Chapter Four (The Mexican War--His Journal of the March from Vera Cruz) is a reproduction of Pierce's journal. Chapter Five (His Services in the Valley of Mexico) is Hawthorne's attempt to put Pierce's injury in a heroic light. Hawthorne wrote, "In the midst of this fire, General Pierce, being the only officer mounted in the brigade, leaped his horse upon an abrupt eminence, and addressed the colonels and captains of the regiments, as they passed, in a few stirring words--reminding them of the honor of their country, of the victory their steady valor would contribute to achieve. Pressing forward to the head of the column, he had nearly reached the practicable ground that lay beyond, when his horse slipped among the rocks, thrust his foot into a crevice, and fell, breaking his own leg, and crushing his rider heavily beneath him."

Pierce went on to win the election in a landslide. His opponents attempt to turn his war record against him failed. Despite his minor role in the war, he beat a man who had a much larger one. Hawthorne used the biography successfully as a campaign tool to make a minor general in the conflict sound important and also heroic in the course of breaking his leg!
Posted by M at 5:29 AM

I simply ADORE how much is completely online now. I'm having my western civ students read Dante's Inferno...and they don't have to buy if they don't want to - it is all online. Now while I can't read that much online, younger people seem to be able to. My husband keeps threathening me that there won't be printed books anymore...makes me cry....

I think printed books will continue to be a staple of western civilization. We will just have more choices.