James K Polk: A book and an article

Hopefully I don’t repeat myself…but both these are good sources and thought I would include both of them. They overlap some points, but hopefully will reinforce the importance of James Polk.

“Who was James K Polk? The Enigma of our Eleventh President” by Robert W. Johannsen

This is a great article that discusses Polk, his life and some of his accomplishments. I have to agree with this article in that many people don’t know who is James Polk was, even though he was one of our greatest presidents. He was a workaholic and the only president to actually accomplish all of his campaign promises. He was a many who did exactly what he set out to do. Now this probably contributed to his death just a few months after leaving office…many people say he actually worked himself to death and maybe he did. The author of this article wrote:
He brought a high level of discipline, diligence, and intellectual acumen to the responsibilities of his office. He was a man who fixed his eyes clearly on his goals, and pursued them "with undeviating resolution."

The article ends with this thought:
Perhaps Harry Truman, a person of no little presidential experience himself, put it best: Polk "exercised the powers of the Presidency ... as they should be exercised"; he knew "exactly what he wanted to do in a specified period of time and did it, and when he got through with it he went home."

I think that this article can help us to better understand the complex man who was our 11th president. He certainly would not play well in today’s media – he was too cold and calculating – but he was a strong president who knew what needed to be done and did it. It is always important for a leader to be willing to work and get events done.

Another interesting tidbit from the article that our presidents should all remember: “Presidents who wish to be remembered as great, some have said, should keep diaries.” After all, how else can we later judge them? (Sorry, couldn’t resist.) 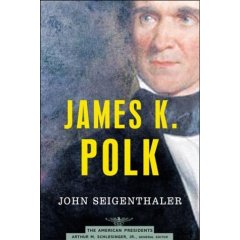 I recently finished Seigenthaler’s biography of James K. Polk. Now this is a book that has been sitting on my shelf in “need to read” pile for over a year…and I actually started the book in like September…but hey, I finally finished it! I’m not a slow reader….just easily distracted by other books…and non-fiction doesn’t pull you with the “have to know the ending” the way fiction does, so it gets left behind easier…but enough defense of why it took me so long!

This is a well-written biography and that is easy to read. In other words, it is not one of the long-winded academic tomes where you have to be a historian to keep going. It really is a book that anyone can read and enjoy (and should…Polk needs more attention!). It is mostly a political biography, but does a really great job of summing up the politics of the era and making them accessible to everyone. While you might not like Polk as a person by the end, you will certainly respect him as a politician. Polk kept a detailed diary while President, so we have a great primary source for his thoughts and actions. Seigenthaler writes, though, that Polk “must be read as a brooding and humorless man.” (pg. 119) He was not necessarily a nice man and as the author tells us, very partisan. Everything was in party lines to Polk. While always polite to everyone’s face, in his diary, he would vent about hated political enemies. Seigenthaler ends the book with these words:

What Polk recorded about himself immeasurably enriches our understanding of his term in office. At the same time, it puts him under a looking glass with human flaws and personality quirks and sometimes makes him the author of his own disparagement. What he wrote in his diary often attests to his smallness as a human being. What he did in four hellish years attest to the greatness of his achievements. Arthur Schlesinger, Jr., has compared Polk’s standing among presidents with that of Harry Truman: “Neither Polk nor Truman was one of those creative presidents who make the nation look at things in a new way…But both had the intelligence and courage to accept the challenge of history. History might have broken them, as it broke Buchanan and Hoover. Instead it forced them, not into personal greatness, but into the performance of great things.” He did great things. That is a powerful epitaph.

On that note, though, there is some interesting views of Buchanan in this biography as well. Buchanan was Polk’s Secretary of State and I have never had a high opinion of Buchanan, but it was greatly lowered by this book. Buchanan really struck me, in this book, as a whiner.
Posted by Jennie W at 1:11 PM

Is it me or do you really like President PolK? :]

Thanks for these annotated references.

Maybe just a little...and you think this is bad...get me started on Sarah Polk...or Abigail Adams, for that matter!