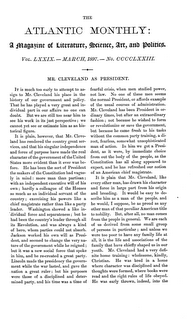 Mr. Cleveland as President. The Cornell University Library has this essay written by Woodrow Wilson available online. It appeared in the March 1897 issue of Atlantic Monthly 79(473), pp. 289-301.

In this essay, Wilson argues that history would regard the presidencies of Cleveland highly. At the time Wilson wrote this, he was regarded as a Bourbon Democrat. Later, Wilson would not think as highly of Cleveland. Wikipedia even notes, "After leaving the White House, Cleveland lived in retirement in Princeton, New Jersey. For a time he was a trustee of Princeton University, bringing him into opposition to the school's president Woodrow Wilson. "

IT is much too early to attempt to assign to Mr. Cleveland his place in the history of our government and policy.That he has played a very great and individual part in our affairs no one can doubt. But we are still too near him to see his work in its just perspective; we can not yet see or estimate him as an historical figure.

It is plain, however, that Mr. Cleveland has rendered the country great services, and that his singular independence and force of purpose have made the real character of the government of the United States more evident than it ever was before. He has been the sort of President the makers of the Constitution had vaguely in mind: more man than partisan; with an independent executive will of his own; hardly a colleague of the Houses so much as an individual servant of the country; exercising his powers like a chief magistrate rather than like a party leader.
Posted by M at 11:39 AM

Interesting article...he says not to judge Cleveland yet...but that's exactly what he is doing...and he will later regret the decision...hmm...maybe some people should think about this....