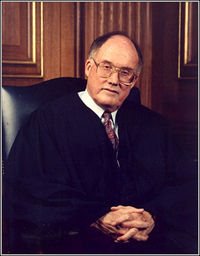 I found this interview interesting and it makes me want to go and read this book. Rehnquist did a good job in his 2004 Centennial Crisis and I enjoyed reading that. If the quality is similar, I will probably enjoy this earlier work too.

BRIAN LAMB: William H. Rehnquist, chief justice of the United States, you have a book out called Grand Inquest. What's it all about?

WILLIAM REHNQUIST: It's about two impeachment trials that took place in the Senate of the United States -- one of Samuel Chase, who was an associate justice of the Supreme Court in the first part of the 19th century, and the second of Andrew Johnson, who was president of the United States right after the Civil War.

LAMB: Why did you write it?

REHNQUIST: Because I thought both the trials had very interesting significance, and I thought they also had kind of a common thread in them. Both represented the Senate in action in a very unusual situation, and both also were kind of victories for the separation of powers that the framers implanted in the Constitution.
Posted by M at 11:45 AM