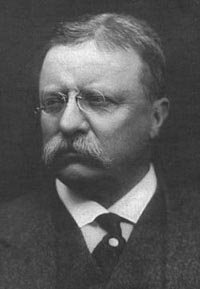 Here is a list of Teddy articles in this issue:

The River of Doubt

Birth Of A Superpower

How To Shrink The World

Lessons from a Larger-than-Life President

At home and abroad, he was the locomotive president, the man who drew his flourishing nation into the future.

Just short of a century after he left the White House, in 1909, the collective memory of Theodore Roosevelt's strength and intellect and charisma still lingers.

Today, when the Justice Department goes after Microsoft or Enron, when the Environmental Protection Agency adjusts mileage standards or the Fed tweaks the prime, somewhere his ghost is smiling.

He was the first president to urge wholeheartedly that the U.S. accept its role as a global power. The "imperial presidencies" that followed his, from Franklin Roosevelt to Lyndon Johnson to George W. Bush, all owe something to his example.
Posted by M at 10:59 AM