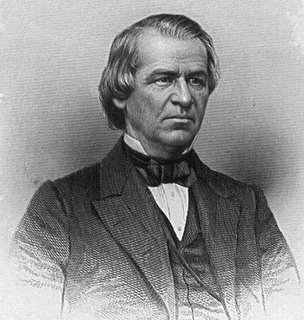 Presidents are often criticized and attacked. The First Amendment assures that anyone can give their opinion of the President and his performance. However, most of the time, the President does not get heckled by the majority of the audience he is addressing. However, President Andrew Johnson did.

A good example of this is the Andrew Johnson Cleveland Speech. It was delivered on September 3, 1866. The crowd was hostile and the President had difficulty in giving his speech due to the heckling. The transcript of the speech has in parentheses some of the crowd comments.

When the President said, "Let me say to those who are still willing to sacrifice my life" the crowd began cheering. When he asked the crowd what his offence was, they replied, "You ain't a radical." The speech did not last long and I am sure Johnson shortened it due to the crowd hostility.

Can you imagine a President today speaking under such circumstances? Hecklers are removed promptly by the Secret Service. Further, it is hard to envision the President giving a speech to a group that was known in advance to be overtly hostile.
Posted by M at 1:33 PM

It definitely is a different environment now! I know that many presidential speeches are invitation only. The VP came to East Grand Forks in the last election and you had to have a special pass to go see him. Then they completely closed off the road around the building and everything.