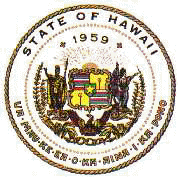 Helena G. Allen, in her book The Betrayal of Liliuokalani, makes reference to a Presidential proclamation issued by Grover Cleveland and published in the New York Sun. It reads:

To My People: Whereas, my good and great sister and fellow sovereign, her gracious majesty, Liliuokalani,queen of Hawaii, has been wickedly and unlawfully dethroned by the machinations of Americans and persons of American descent in those islands, being instigated thereto by the devil, one John L. Stevens; and whereas, my well-conceived plans for the restoration of her sacred majesty have not had the result they deserved but her majesty is still defrauded of her legal rights by her refractory and rebellious subjects, and her position is a just cause of sympathy and alarm; now, therefore, I, Grover Cleveland, President of the United States, do hereby ordain and appoint the last day of April next as a day of solemn fasting, humiliation and prayer. Let my people humble themselves and repent for their injustice to me and my great and good sister, and pray, without distinction of color, for her speedy return to the throne and the discomfiture of the miserable herd of missionaries and their sons, her enemies and traducers. Long Live Liliuokalani, the de jure queen of Hawaii. Done at our mansion in Washington this 25th day of February, 1894.
Grover Cleveland A true copy.
Attest, Walter Q. Gresham, Secretary of State

This proclamation has been cited in several places on the Web now and even inspired one site to call every April 30th Hawaii Restoration Day. There is one problem with this so called Presidential Proclamation. Cleveland never issued it. It appears to be a joke.

Jere Krischel in his article Joke Proclamation wrote, "Helena G. Allen alleged that a proclamation of President Cleveland was printed in the New York Sun, on February 26, 1894. However, an examination of microfilm of the New York Sun, February 26, 1894, shows no such proclamation at all. She mentioned it in the context of discussing the constitution of the Republic of Hawai'i (which is odd, since the constitution of the Republic of Hawaii was not issued until 4 months after the date of the proclamation). " Krischel also notes that this proclamation does not appear in Cleveland's Presidential Papers.

Just reading the text of this proclamation is a give away that this was not issued by President Cleveland in any official capacity. John L. Stevens is called a devil. He also wishes for the "discomfiture of the miserable herd of missionaries and their sons." This choice of wording I think tips of the joke.

Cleveland also supposedly wrote, "my well-conceived plans for the restoration of her sacred majesty have not had the result they deserved." Cleveland did aid in trying to get Liliuokalani put back on the throne. He tried repeatedly to destabilize the Republic of Hawaii. However, there was some secrecy involved in this and I doubt he would be taking credit for it while still in office.

Who created this joke? It may well have been Helena G. Allen. This may have been fabricated for her book or maybe she was fooled by another prankster. It is hard to say. This joke proclamation has taken on a life of it's own and I am sure it will be believed and cited for centuries to come now that it is out on the Internet.

Does anyone know of any other false presidential proclamations making the rounds?
Posted by M at 10:38 AM