Eleanor Roosevelts takes on the DAR

Eleanor Roosevelt was one of the most influential women of the 20th century. What she did could change opinions and actions and so her consistent stances for improved civil liberties for all made a difference in the US.

In 1939, Marian Anderson, one of the greatest contraltos to ever sing, was refused permission to sing at Constitution Hall by the DAR (Daughters of the American Revolution) solely because she was African-American. Eleanor Roosevelt resigned in protest from the DAR (this link includes a brief history, her letter of resignation and her subsequent column).

Mrs. Roosevelt didn’t stop there though. She helped to make sure Marian Anderson got a concert. Ms. Anderson sang at the base of the Lincoln Memorial on Easter Sunday, 1939 and was broadcast across the country. (There is an audio only link as well as a video link embedded in the text.) She got more than just one concert, but a chance to sing to the entire nation. 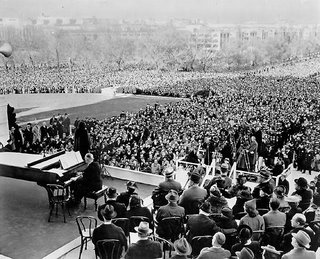 The column after the Marian Anderson incident was not Mrs. Roosevelt’s only stand on racism either. Another example is in 1960 when she compared the American south to South Africa in her column. Her recommendations to the civil rights movement were as follows:
As I have said before, I do not think boycotting lunch counters that are segregated in the North has much value except in letting off our own steam. But I do think that refusing to buy South African goods such as lobster tails, diamonds, caracul coats, etc., none of which we buy every day-and at the same time refusing to buy anything at all from chain stores that have segregation of any kind in our South will have a very salutary effect.

Eleanor Roosevelt was an activist First Lady who truly made a difference in this country (She made Time's top 100 people of the century) and this is just one area where she used her influence to bring a message of civil liberties to the country.
Posted by Jennie W at 8:01 AM

More informative than your average blog!

I was an elementary school counselor until 3 years ago when I became too severely disabled to be able to keep working. Knew I'd miss it, but not how much. You go on medical leave hoping to return and never do - much too abrupt a transition to go from 23 years of kids in your daily life to none at all.

We hope you will be back then!