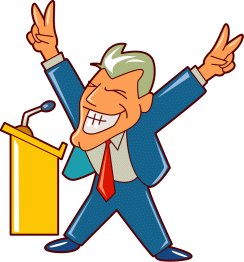 Georgians can’t turn on the radio or television these days without political commericals. At some point within the last few days everyone in my house from 13 to 46 has stated, “I hate this time of year.” It’s probably the same where you live as well.

Candidates are accusing each other of all sorts of things. Allegations of lying, using the tax-payer’s money for private use, associations with the wrong kind of people, and misuse of government resources are just some of the wonderful things being said about those who are running for office. Voting records are brought up with the candidate in question voting against bills that would help children in some way yet what the voter doesn’t know is some ridiculous rider had been attached to the legislation which necessitated the candidate to vote against it. Things aren’t always as they seem.

A recent Republican debate between Georgia’s Lt. Governor candidates was a continual barb-fest. There were very few issues brought up or discussed without personal attacks being part of the candidates, response.

One of the responsibilities I’m charged with as a history teacher is to help students connect the past to their current lives. I think we do irreparable damage to our collective national memory when we place our Founding Fathers on too high a pedestal. These men did do wonderful things, but they also were not perfect. While we have to remember they lived in much different times than we do today, we also must realize things really haven’t changed when you examine the facts.

The Election of 1800 shows us that many of the men dedicated to the formation of this country were also very cutthroat in their efforts to maintain power for themselves and their friends. Political in-fighting and outragous behavior is not anything new.

Generally educators stick to the basics. The Election of 1800 shows us that the Constitution worked to a point and then presented a slight glitch that was settled by the twelth amendment. Studying this election gives students more knowledge regarding the rise of political parties. This election also shows us how peaceful the change of power is between different leaders and most importantly between political parties. However, a look at historical documents including journals and letters from this time can give students insight into the adversarial relationships which is in direction opposition to what they generally learn.

Though most Americans have become used to the mud slinging and political strategies using accusations I think they would be surprised at some of the methods used in 1800. An article from historycentral.com relates Federalist newspapers claimed the election of Jefferson would cause “teachings of murder, robbery, rape, adultary, and incest.” There were also charges of strange ritualistic rites being performed at Monticello.

Alexander Hamiliton claimed John Adams was unstable, impulsive and made irrational decisions in a pamphlet Hamilton published. Others said Adams was a poor judge of character and was senile. Republicans claimed Adams was a monarchist and even suggested there was a plot to marry his son to one of King George III’s daughters, however, George Washington had shown up just in time to quash the plot.

The Federalists claimed Jefferson was godless, an athiest nonbeliever, and a reign of terror would be unleashed if he was elected.

Thomas Jefferson, who most modern Americans hold in such high esteem, said the Federalists were a “reign of witches” and they were the party “adverse to liberty.”

This countered his critics who accused Jefferson of being a coward, used his political record while governor of Virginia against him, and accused him of being a Jacobin---the most radical faction during the French Revolution.

The Constitution directed those involved to allow the House of Representatives to settle things. In an web article from Smithsonian Magazine found here, John Ferling correctly states, “Federalist and Republicans appeared to agree on one thing only: that the victor in 1800 would set America’s course for generations to come, perhaps forever.”

During the debates in the House of Representatives there was even talk of disunion and civil war. Two states organized their milita in case Jefferson did not prevail. It took thirty-six different ballots before the tie was broken. Thomas Jefferson was finally named president and as was the custom in those days, the runner up, Burr, became the vice president.

Is it any wonder then that Jefferson would call for reconciliation and a smooth change in power during his inaugural address? Read it here.

Mr Ferling was correct in his idea that the Election of 1800 would set America’s course for generations to come. It gave birth to the modern campaign strategies we see today.
Posted by EHT at 9:35 AM

There is a good ERIC Digest on this called "The Election of 1800: Teaching about a Critical Moment in the History of American Constitutional Democracy" at http://www.ericdigests.org/2000-2/1800.htm.