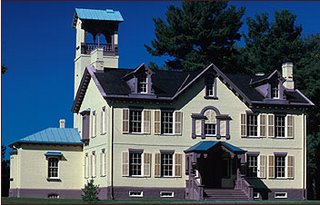 Lindenwald was where Martin Van Buren spent his retirement. I was unsure at first if this site would give me anything of substance (beyond just to see where Van Buren lived at one point), but it really surprised me and offered a lot of great information. The NPS offers many “teaching with historic places lesson plans” and this is one of them. The site offers information readings and then discussion questions. An interesting on is the one called “Home at Last” that describes his retirement at Lindenwald. The site also offers other acitivites that are more politically oriented, like this one comparing Van Buren and Hoover:

Activity 2: Comparing Presidents
Both Van Buren and Herbert Hoover lost their opportunity for a second term when they were blamed for depressions that were not their fault. Have students research the financial panic and depression of 1837 and compare it with the Great Depression that began in 1929. Have them compare the positions of Van Buren and Hoover on the role of government in ending a depression. Facilitate students’ thinking by reading aloud the following: (1) When questioned as to why he did not do more to alleviate suffering during the depression of 1837, Van Buren replied, "It is not the objective of government to make men rich—nor repair their losses"; (2) Hoover claimed that federal aid would cause "degeneration of that independence and initiation which are the very foundation of democracy." Then ask students to write short papers in which they discuss the current accepted responsibility of the president and the federal government for the economic welfare of the nation.

As you can see from this short assignment, this really is a great topic and could add a lot of your class. The lessons are also easily adapted by grade-level. This could be adapted to be anything from some very basic you discussion with your 5th graders to a college level discussion on these depressions.

The site offers a lot more than just a quick glance at Van Buren’s home, but really a lot of meat for your own perusal or for use in the classroom.

For other TwHP, you can visit the NPS.