The week that changed the world? 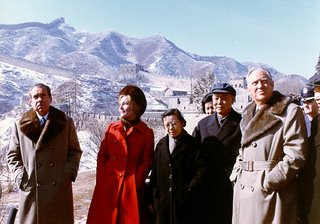 Nixons at the Great Wall of China
Richard Nixon called his 1972 visit to China “the week that changed the world.” Nixon began his career as extremely anticommunist, but upon becoming President agreed with senior State Department members that China could be useful to the US. In China, leading diplomat Chou En-Lai also saw the importance of a relationship with the US and was able to convince Mao Zedong that it was time to form a relationship with the US.

In February of 1971, Nixon announced his intentions to open a dialogue with Beijing. Both the US and China were willing to compromise on their “one China” stance – for now. In August of 1971 the US withdrew its objection to the People’s Republic of China being admitted to the United Nations. In October they were formally seated on the UN Security Council in place of Taiwan. Henry Kissinger was in China (supposedly secretly) in July of 1971. In February of 1972, President Nixon and Henry Kissinger went formally to China. There they met with Chou En-Lai and Mao Zedong. While the political discussions would have a lasting impact on the world that was not what the American public would remember. It would be the very well publicized visit that gave the US its first peek behind the “Bamboo Curtain.” We always remember what we see don’t we? And President Nixon made sure we saw this very well (he specifically asked for video coverage rather than print)! So let’s take a pictoral look at this visit:

All pictures are from the Ollie Atkins Photograph Collection (I just picked a few, there are lots more if you follow the link).
The politics: 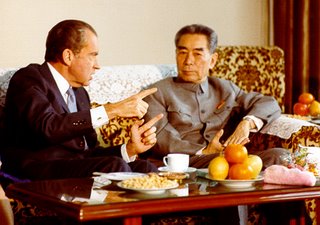 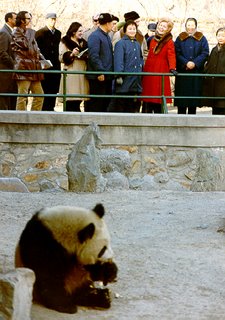 Pat Nixon at the zoo 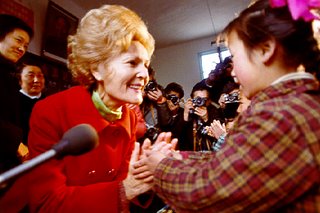 Some video footage from the visit:

NBC News footage from China visit (you have to scroll down the page and it takes a minute to load but there should be a square box called Video: Nixon in China)

For the teachers among us: Teacher’s Guide to Nixon’s China Policy

So was President Nixon right? Did this week "change the world?" Let us know what you think!

Great post. I think this was a very important visit. I have read that this visit helped convince Nixon to withdraw American troops from Vietnam. Regardless, it showed that a conservative American president would at least take Communist Chian seriously. This meant a lot to the Chinese.

A lot of sites/books I consulted when writing this all mentioned that Nixon was doing this because of problems in Vietnam and wanting to get out of that "police action."

One of the sites mentioned that the Chinese diplomat - Chou En-Lai - had been very rudely snubbed by the Ameriacns in 1957 (they refused to shake his hand) and so Nixon made sure to greet them properly when he came to China.

I think it was open to get open communication between the two countries. I know the US was also interested as another way to "contain" Russia.