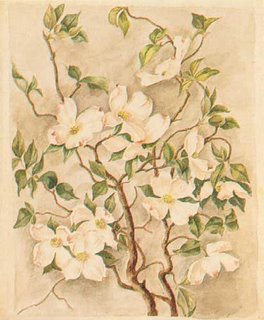 Source: White House Art History
Mrs. Harrison was a gifted painter - she painted the dogwoods pictured above. She did a painting of the White House orchids that was reproduced and given away to the "women and girls" of the US.

Now why did I put John Hopkins in the title? Well, John Hopkins approached the First Lady about helping them to raise money, but she refused. Why did she refuse? Because they did not accept women. John Hopkins reevaluated their position and decided to admit women and then Mrs. Harrison helped them with their fundraising!

Mrs. Harrison was the first President General of the Daughters of the American Revolution (DAR). Her speech at their first congress was the first recorded speech by a sitting First Lady.
Posted by Jennie W at 10:07 AM

What a beautiful painting. I bet she was a very graceful lady as well.

She really seemed to be and she actually did a lot with her position as First Lady.

The NFLL biography makes a good point on why many people forget about her:
Caroline Harrison’s tenure as First Lady was overshadowed by her predecessor and her successor: Frances Cleveland. Mrs. Cleveland’s youth made Caroline Harrison seem older and more staid than she really was.
It then goes on to say that Mrs. Harrison was actually much more proactive than Mrs. Cleveland was.