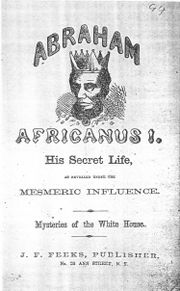 The United States of America was locked in a war with no end in sight. Prominent members of the military had begun to question the competence of the Commander-in-Chief. Civil libertarians were alarmed at what they believed were unconstitutional encroachments on civil rights in the country. The opposition party in the USA made the decision that the only solution was an end to the war and the removal of a hated and unpopular president. Welcome to 1864.

The Democratic National Convention was held in Chicago, Illinois on August 29th, 1864. The peace faction of the party was able to fend off pro-war Democrats and dictate the language of the 1864 Democratic platform. Several themes are apparent in this short document.

To begin, there was no hiding the fact that the Democrats were ready to concede the war and allow the Confederacy to survive. The platform stated, "Resolved, That this convention does explicitly declare, as the sense of the American people, that after four years of failure to restore the Union by the experiment of war, during which, under the pretense of a military necessity of war-power higher than the Constitution, the Constitution itself has been disregarded in every part, and public liberty and private right alike trodden down, and the material prosperity of the country essentially impaired, justice, humanity, liberty, and the public welfare demand that immediate efforts be made for a cessation of hostilities, with a view of an ultimate convention of the States, or other peaceable means, to the end that, at the earliest practicable moment, peace may be restored on the basis of the Federal Union of the States."

This was coupled with attacks on the Lincoln Administration for eroding American civil rights. The platform declared, " Resolved, That the aim and object of the Democratic party is to preserve the Federal Union and the rights of the States unimpaired, and they hereby declare that they consider that the administrative usurpation of extraordinary and dangerous powers not granted by the Constitution; the subversion of the civil by military law in States not in insurrection; the arbitrary military arrest, imprisonment, trial, and sentence of American citizens in States where civil law exists in full force; the suppression of freedom of speech and of the press; the denial of the right of asylum; the open and avowed disregard of State rights; the employment of unusual test-oaths; and the interference with and denial of the right of the people to bear arms in their defense is calculated to prevent a restoration of the Union and the perpetuation of a Government deriving its just powers from the consent of the governed."

However, the Democrats were also quick to show their support for the troops. The platform included, "Resolved, That the sympathy of the Democratic party is heartily and earnestly extended to the soldiery of our army and sailors of our navy, who are and have been in the field and on the sea under the flag of our country, and, in the events of its attaining power, they will receive all the care, protection, and regard that the brave soldiers and sailors of the republic have so nobly earned. "

Strangely, the Democrats followed up this platform by nominating a war Democrat. General George B. McClellan was a vocal critic of President Lincoln who believed that Lincoln was militarily incompetent. However, he believed that the war needed to continue and rejected the platform he was nominated on.

The Presidential Election of 1864 did not go well for the Democrats and McClellan. Much to their horror, Lincoln won in a landslide. He won with 212 Electoral College votes to 21 and a popular vote margin of 403,000, or 55%. The American Civil War ended the next year as well with a Union victory. The Democratic plank that read "that after four years of failure to restore the Union by the experiment of war" had been seriously in error. That "experiment of war" had saved the Union. The Platform of 1864 seriously weakened the party and they would not elect another president until 1884.
Posted by M at 5:19 AM

I knew that McClellan (the general who never moved) had ran against Lincoln in 1864, but I didn't know about that platform! That's so absurd its hilarous! Thanks for the information!