Renovation of the White House by the Truman Administration

The Truman remodel was a major undertaking that encompassed the entire structure of the building. Here is what the Truman Library writes about this renovation:
It was an engineering marvel. In December 1949 crews began dismantling interior rooms, saving much of the wood trim, doors, hardware, and other visible details for possible future use. At the same time other crews poured 126 new reinforced concrete support columns to a depth of 25 feet to provide solid support for the exterior walls. This would eventually provide space for two new sub-basement levels beneath the White House. By March 1950 the wholesale demolition of the interior was well underway, leaving only a web of temporary steel supports to hold the exterior walls in place. By autumn, the White House was just a cavernous hollow space, 165 feet long, 85 feet wide, and 70 to 80 feet high. 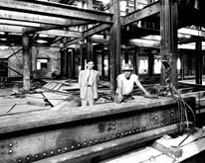 Men inspecting steel supports for under the oval office (can you believe that’s the White House?)

The final product that the Trumans returned to was a White House that looked much the same, but was completely refurbished.
On the evening of March 27, 1952, in a small ceremony at the entrance door, President Truman received a gold key to the newly-renovated White House. After spending more than three years living in the smaller quarters of the Blair House a block to the North, the first family returned to the mansion for their first night back in residence. It was both the same home they had left three years earlier and a new and larger home as well. Its original 48 rooms had expanded to 54, not including two entirely new sub-basement levels containing service areas and other support facilities. Where once the White House had nearly collapsed from its structural deficiencies, now 660 tons of steel strengthened the new concrete inner walls and floors. Although retaining much of its historical appearance, the interior of the house now sparkled with new paint, wall coverings, parquet flooring and tile. At a cost of $5.7 million, the White House had been rebuilt to serve the needs of the modern Presidency while retaining the symbolism as the historic home of the President. 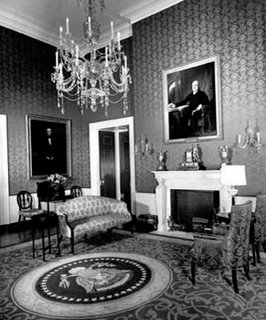 Renovated Green Room
You can see all the Abbie Rowe pictures for a complete documentation of the Truman renovation at the Truman Library website.
Posted by Jennie W at 8:38 AM

This is so neat. I would have loved to be able to be on the team that dismatled things. I would have liked to see what might be hiding the cupboards and in between the walls.

The White House is one of those houses that I move just love to be able to explore - look in every closet, behind every couch, under all the rugs, etc. I wouldn't mind being on the cleaning staff there! I took a tour once...so disappointing! You don't get to see anything!

I have an original 1949 Comission on Renovation book on the Whitehouse Renovation project...I want to sell it..