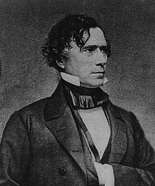 The Franklin Pierce Pages are devoted to Franklin trivia. The author decided that Millard Fillmore had been too long trivialized as the most obscure President and decided to transfer this to Franklin Pierce. His assessment of Pierce’s term was:
Pierce was one of the stream of presidents who helplessly presided over a deteriorating union in the years leading up to the Civil War and Lincoln’s presidency. He was a Democrat who served one term from 1853 to 1857. Very little happened.

Some other trivia about Pierce’s life:
Pierce’s salad days were clearly in college at Bowdoin College in Maine. There, he was a classmate of Nathaniel Hawthorne, who later became a writer and author of The Scarlet Letter, as well as one of Pierce’s closest friends and advisors. At Bowdoin, Pierce also knew Henry Wadsworth Longfellow. Initially, Pierce had too much fun and did too little studying. As a sophomore, his grades were at the bottom of the class. He improved his grades and went on to become a lawyer. Oh, and president, too.

This site also offers more articles and even a Pierce quiz. I managed a 90% - your turn! (NOTE: Read the article first unless you a complete Pierce trivia guru.)

One of other articles asks the question: What do you have to do to become one of the worst presidents ever? How do you manage to be largely forgotten, but when you are remembered, it is as the "fifth of six below-average presidents"? That's how a 1962 poll of historians ranked Franklin Pierce. It placed him "above Buchanan, and below Coolidge."

So take some time and learn a little about Franklin Pierce – reputedly the most handsome President (what do you think? Is it just me or is he really not that good looking? Maybe tastes have changed…)
Posted by Jennie W at 11:41 AM

I don't know that "very little happened," Jennie. Unless you dismiss the Kansas-Nebraska Act and Bloody Kansas, which contributed to the rise of Lincoln and - ultimately - the Civil War, America's most costly and unnecessary war.

And don't forget the Ostend Manifesto fiasco. For which - along with other crimes - "Doughface" Pierce was abandoned by his own party, which probably led him to later join the Confederacy and drink himself to death. (I guess being "handsome" isn't always all it's cracked up to be.)

As for his ranking among the worst US presidents, don't forget that Pierce was the great great grand-uncle of current president George W. Bush. Who, as I mention in my blog: http://scarecrow-prez.blogspot.com/
seems destined for a similar historical rating.

Maybe you'd be so kind as to add a link to your webpage of resources? For those who have the stomach for the "inconvenient truth" about the American presidents!

"As for his ranking among the worst US presidents, don't forget that Pierce was the great great grand-uncle of current president George W. Bush. Who, as I mention in my blog: http://scarecrow-prez.blogspot.com/
seems destined for a similar historical rating."

Considering that Lincoln was the most unpopular president in history when he lived and is now noted as one of the best by historians, popularity is poor judge of presidential greatness. We will find out how bad or good historians rate Bush in about another hundred years. Until then, you are entitled to your opinion. However, do not confuse it with an actual historical ranking.

As a note, the comment "very little happened" isn't mine - it is the website's. And if you access the page, you will see they do discuss the Kansas-Nebraska Act as well as note other facts that happened during his term.

As to the Civil War - was it really "unncessary?" Lincoln should have just let the South leave the Union?

Yes, Bloody Kansas was part of the tide towards the Civil War, but so were a lot of things. We had been leading up to a confrontation almost since the formation of the US.

Jennie: I believe the Civil War was preventable. Although, granted, by the time they got to Pierce, or certainly Buchanan, it may have been too late. ("I am the last president of the United States." - Buchanan)

Remember that Lincoln was elected by the North. He wasn't even on the ballot in most of the South. By the time he came to power, the South - which had pledged to secede if Lincoln was elected - was politically and economically subservient and had little alternative left if it didn't want to be essentially a colony of the North.

I'm not arguing in favor of succession, and certainly not of slavery. But the Northern elites who controlled the government could have prevented the war with diplomacy. And they didn't, because they didn't want to.
http://scarecrow-prez.blogspot.com/

Michael: Granted, "popularity is a poor record of presidential greatness." But I don't think the world can wait "another hundred years" to find out if Bush was any good, considering the consequences of not judging him a bit sooner. (Like now maybe?)

Of course, since he's blocked indefinitely disclosure of all his presidential records, we may have no choice. And the opinion is not mine, but of 8 out of 10 historians:
http://hnn.us/articles/5019.html

"But I don't think the world can wait "another hundred years" to find out if Bush was any good, considering the consequences of not judging him a bit sooner. (Like now maybe?)"

Make any judgement you want now. Bush will be President for two more years and then he will be retired. Make all the negative or positive comments you want. Just do not get confused and believe your political views on current events constitute history.

And Lincoln would have done poorly with historians in 1865 too. Once we get historians born after Bush is out of office not tainted by their own political views who can objectively look at the Bush presidency, we will begin to get a better picture of Bush's historical legacy.

Your point is well taken, Michael. And thank you for your magnanimity.

However, I suspect it might be difficult to find a historian "untainted by political views," no matter how far removed by time. And certainly it's impossible to judge a president's greatness in the absence of any political POV whatsoever. (History is not physics, after all.)

Unless, of course, you consider "greatness" simply as a measure of a person's influence on history. (Hitler as Time Magazine's "Man of the Year," for example.) And even that involves a degree of subjectivity as to what is important and "historical" and what is not.

Better to admit one's bias at the outset rather than pretend there is none, wouldn't you agree?