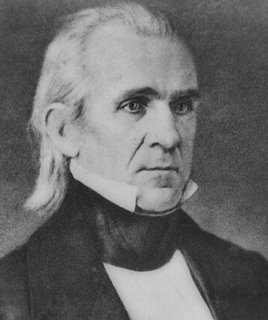 Polk was the first ‘dark horse’ elected to the office of president. He had been the governor of Tennessee, had served in Congress, and was considered to be a good ‘Jacksonian’. In fact, one nickname given to Polk was ‘Little Hickory’ since he was a great friend of Andrew Jackson.

At one point Polk made the following observation regarding the office of president, “No president who performs his duties faithfully and conscientiously can have any leisure.”

Polk lived up this quotation. He was a very driven man. During his one term presidency from 1845 to 1849, he set four goals…he wanted to reestablish the independent Treasury System, reduce the tariff, resolve the Oregon boundary dispute, and wrestle California from Mexico’s control. Polk is fairly high in opinion polls that rank U.S. presidents mainly because his agenda was completed in full by the end of his first and only term. That is some accomplishment considering I have problems with a daily list of things to do.

Students are often amazed at the process it took for our nation to become the recognizable shape it is today. Most think the United States simply appeared as is. Bit by bit, territory by territory, treaty by treaty our nation took its shape over time. You can see the whole process by viewing an interactive map here. What most Americans don’t realize is the huge contribution Polk made to make the saying “sea to shining sea” a real possibility.

Polk’s election victory was considered to be a mandate for Manifest Destiny. It did not take long for Polk’s administration to obtain an agreement with the British over the Oregon boundary. The fight for Texas became a little more complicated.

Before Polk was actually sworn in, Congress voted to annex Texas. Mexico became angry when Texas entered the Union in 1845. They disputed the Rio Grande river as the southern boundary of the United States stating that the correct border was really the Nueces River. Any efforts Polk’s administration made with Mexico regarding an agreement failed miserably.

In January, 1846 a new government was in place in Mexico. They began to claim all of Texas and stated they were ready for war. General Zachary Taylor was directed to move American forces to the Rio Grande. The Mexican government stated that the American action was a declaration of war. During the next two years the Mexican War was executed and won by the Polk administration.

At the end of the Mexican War our nation gained territory larger than the Louisiana Purchase with the signing of the Treaty of Guadalupe Hildago in 1848. The Rio Grande was set as the southern boundary of the United States, Texas was most definitely part of the United States, and along with the Mexican Cession the U.S. gained territory that would one day become California, Arizona, Utah, Nevada, and parts of Colorado and Wyoming. On the downside the new territories would become tangled in the slavery debate eventually leading to the Civil War.

Sadly Polk died within three months of leaving office. Ever the workaholic some say he simply worked himself to death while others cite that he may have contracted cholera while on a trip through the south.
Posted by EHT at 7:36 PM

Nicely done!!! I will be using this is class on Friday.

Thanks Mr. H. After looking at your sites and what you are doing in your classroom I'm honored you would use anything of mine.