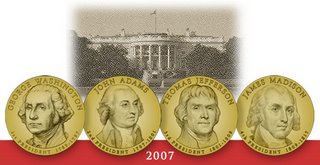 The Presidential $1 Coin Program. I do not like dollar coins. I always try to get rid of them. They do not fit in my wallet. However, I am excited about this new coin series coming from the United States Mint. Every dead American president will be featured on a dollar coin.

From the US Mint, "The United States is honoring our Nation’s Presidents by issuing $1 circulating coins featuring their images in the order that they served, beginning with Presidents Washington, Adams, Jefferson and Madison in 2007. The United States Mint will mint and issue four Presidential $1 coins per year, and each will have a reverse design featuring a striking rendition of the Statue of Liberty. These coins will have several features that are unique to United States circulating coinage. Although the size, weight and metal composition of the new Presidential $1 Coin will be identical to that of the Golden Dollar featuring Sacagawea, there are several unique features that make this new coin very distinctive. "

I can not wait to get my Millard Fillmore coin! I have to wait until 2010 to get it though. And that John Tyler coin coming in 2009 will be a real keeper. Of course, Grover Cleveland gets two coins both of which will be released in 2012.

I think this is a good idea. I have enjoyed the state quarter program. It makes me take a look at my quarters to see what state I am holding. The Presidential dollar coins will be fun too. How about vice-presidential pennies next? Or Secretary of State nickels. And first lady dimes!
Posted by M at 7:16 AM

I happen to love dollar coins - I can't wait for my James Polk coin!