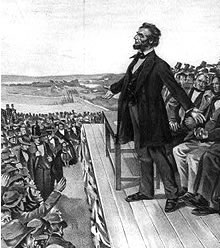 Gettysburg's Good News. A recent issue of US News & World Report has this article by Gabor Boritt. It is based on a full length book of the same name. I found this article very thought provoking.

GETTYSBURG, JULY 4, 1863. Dreadful silence. It rains. People crawl out of their cellars, blinking in the gloomy light, trying to find their neighbors, food, news-life. The battle is over, but the smell of putrid animal flesh mingles with the odor of human decay. It extends into the spirit of the people. War had come to them. Now it had gone and left the horror behind. No toasts are offered today, no fireworks, no parades, no services in the churches filled with grievously wounded men.

But Sally Myers, 23, full of life, forges ahead. The sun comes out, and the schoolteacher writes in her diary: "I never spent a happier Fourth. It seemed so bright." The Union had retaken the town. A soldier will later add: "The Glorious Fourth and we are still a Nation, and shall most likely continue to be for centuries to come." Prof. Michael Jacobs of Gettysburg's college comes out of his house on Middle Street with his son Henry. So do others. A band marches down Baltimore Street, fife and drum breaking the noxious grip of stillness. People move toward the square. Life begins again.

It is Independence Day, after all, the day of victory in 1776, four score and seven years ago. The armies are leaving. But the wounded and dead remain, on the fields, in houses, in barns, and in hospital tents. Twenty-one thousand wounded; perhaps 10,000 dead.
Posted by M at 10:51 AM