Have You Received Your Christmas Card From the White House Yet? 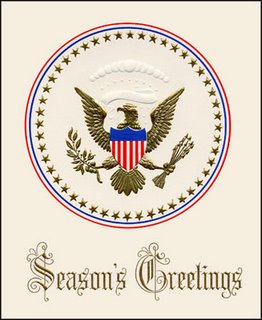 I haven’t. Many people have received one, though, and many are not happy. This Washington Post column bemoans the fact that the word “Christmas” is not included in this year’s message being sent to 1.4 million addresses.

This article from U.S. News and World Report shows an image of this year’s card, and discusses the fact that it’s a Hallmark. However, Hallmark has printed the cards for many years going back at least as far as the Eisenhower card from 1960.

Calvin Coolidge began the tradition of sending greetings from the White House in 1927. So many folks wanted the card President Coolidge finally had it printed in the newspaper.

By 1931, President Hoover was sending personal photos to family, friends, and staff. The Roosevelt’s continued this tradition throughout FDR’s presidency. By the 1950s the sending of Christmas greetings had greatly expanded to include American ambassadors, members of the Cabinet and Congress, foreign heads of state and government officials. It was during Eisenhower’s term in office that the Presidential Holiday Greeting became the official White House Christmas card per the White House website.

If you get your hands on an official White House card you might just want to hang onto it whether you like the image or not and whether you agree with the verse. Some older cards are worth a bit of money. This website wants $995 for the 1960 Eisenhower card.

One of the prettiest cards, in my opinion, is the official White House card sent by President Johnson in 1967. Over 2,600 cards were sent that year. In 1992, President and Mrs. Bush utilized the National Tree on their card decorated with red, white, and blue lights. You can see more images of past White House cards here.
Posted by EHT at 7:41 PM