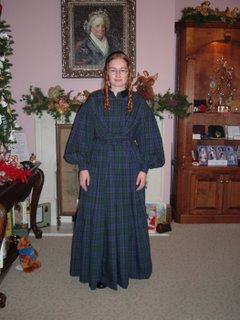 Does this look like Sarah Polk to you? I am now officially "Sarah Polk" at the National First Ladies Library as my costume is finished.

In honor of that, let's talk about Sarah! She was extremely well-educated and as she had no children, she become an assistant to James. She helped him with his speeches, clipped pertinent newspaper articles for him and generally provided him a sounding board. She was one of the most involved political spouses of her time.

Sarah was a very strict Christian, forbidding hard liquor and dancing at the White House (very much in contrast to the galas of her predecessor, the very young Julia Tyler). She refused to allow any business to be conducted on Sunday and even would turn away foreign dignitaries if they arrived on a Sunday.

When James left office in 1848, they headed home to retirement. James would die just months later, but Sarah lived another 42 years. She witnessed the Civil War, which she chose not to take sides in. She received both Union and Confederate officiers on her property, but Polk Place was considered neutral ground. She also later entertained the Hayes and the Clevelands.
Posted by Jennie W at 9:37 PM

Yes, you do have a resemblence to Sarah Polk. I just looked at the young picture of her at Wikipedia and you certainly can play the part.

I do not see the point in banning hard liquor at the White House unless you ban all alcohol. It is easy to get drunk on beer and wine too. I have done it without even trying.

I'm glad you agree on my looks. I refuse to go to the next step and dye my hair. I LIKE my hair! Sarah Polk was likened to a "Spanish Madonna" and I obviously can't pull that off. But the corkscrew curls do help!

Anyway, on the hard liquor issue - I agree as well, but obviously she didn't. Lucy Hayes did completely ban liquor.

Except all her dresses were off the shoulder, not all buttoned up and vibrant colors.