James Buchanan and the Election of 1856 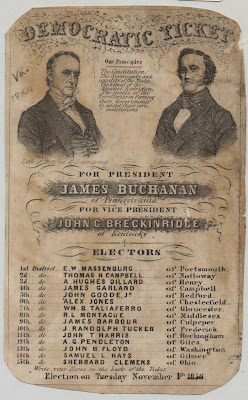 I admit it - I felt sorry for James Buchanan after he made the top of the worst President list. So I decided he needed a post of his own. I've put two campaign posters on the left side to go with my comments on the Election of 1856.
So why did Buchanan get the Democratic nomination? Well, according to the Miller Center of Public Affairs:
Hailing from a populous state as a longtime member of Congress and an envoy to Russia and England, Buchanan had many attractive political assets. In essence, Buchanan gave the delegates the kind of hope that seemed in very short supply during the tumultuous mid-1850s. A smooth, pleasantly dull conservative, he upset few people. Above all, Buchanan was from the North, yet he maintained ideological ties to the South -- a "doughface" in the slang of the day. Buchanan forces quietly told the Douglas men that cooperation from the "Little Giant" would enhance his chances for 1860, and Douglas withdrew from the race. "Old Buck" got more ballots than any other candidate in the first round, and he clinched the Democratic nomination with the requisite two-thirds majority on the seventeenth ballot, an easy victory during that bitter era. John C. Breckinridge of Kentucky received the party's vice presidential nod. 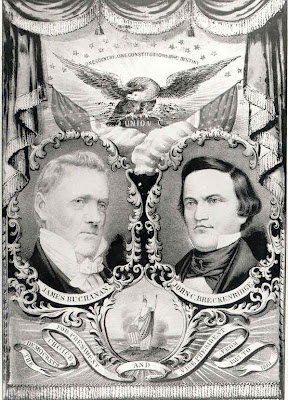 Who was Buchanan running against? California Senator John Fremont - a famous explorer and former President Millard Fillmore with the Know-Nothing party.
In 1856, slavery was the hot topic - "Bleeding Kansas" and other similar issues were on everyone's mind. Buchanan went the traditional method campaigning - doing almost no campaigning of his own. The election quickly became dirty:
Political dirty tricks were the norm. Democrats marked badges "Black Republican" depicting a runaway slave and made frequent jabs at Frémont's out-of-wedlock birth. Republicans countered with remarks about Buchanan's age and bachelorhood as well as the nickname "Ten-Cent Jimmy" after he unwisely said in public that he considered ten cents a day a fair wage for manual laborers. They also suggested that Buchanan's trademark tendency to tilt his head stemmed not from deficient eyesight but because he had once tried to hang himself.
On the actual campaign issues, Buchanan kept with the traditional method of individual states choosing to allow or ban slavery. Fremont was a staunch abolitionist. The Know-Nothing Party actually helped Buchanan - charging Fremont with Catholicism and taking away some of his voter base. Buchanan carried the South and the border states, but with deep divisions in the North, still only took about 1/2 of the popular vote.
Buchanan had wanted to be President, but the situation of the US in 1856 had him penning these lines before the election: I had hoped for the nomination in 1844, again in 1848, and even in 1852, but now I would hesitate to take it. Before many years the abolitionists will bring war upon this land. It may come during the next presidential term.

For a different take, there is a great lesson plan offered by the Center for American Music at the Univeristy of Pittsburgh. It offers a way to teach the Election of 1856 through music, such as this song:

Come all ye men of every state,
Our creed is broad and fair;
Buchanan is our candidate,
And we'll put him in the White House Chair.

chorus:
Then come ye men from ev'ry state,
Our creed is broad and fair;
Buchanan is our candidate,
And we'll put him in the White House Chair.

Let all our hearts for union be,
For the North and south are one;
They've worked together manfully,
And together they will still work on.

We'll have no dark designing band
To rule with secret sway;
We'll give to all a helping hand,
And be open as the light of day.

We'll not outlaw the land that holds
The bones of Washington;
Where Jackson fought and Marion bled,
And the battles of the brave were won.