The Tyler Courtship and Wedding 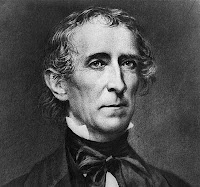 This article details the life of Julia Gardiner Tyler. What I've picked to share today is their courtship and wedding as Tyler was the first man to marry while President. John Tyler came to DC as a married man, but Letitia Tyler died in the fall of 1842. Julia had actually already met the President by this time - they met in January of 1842. But in the spring of 1843, the now widowed Tyler saw Julia again - this at a card party at the White House and was enthralled by the young beauty (he was 30 years older than her). He asked her to marry him within weeks, but she didn't immediately agree as it seemed her mother was against the match. In February of 1844, John and Julia were both on a boat when a gun exploded, killing a number of people, including Julia's father and this seemed to draw them together. The next June, Julia married John Tyler in a secret ceremony in New York. She immediately stepped into the role of First Lady:

"I have commenced my auspicious reign," Julia Tyler wrote after the wedding, "and am in quiet possession of the Presidential Mansion."She became the first first lady to pose for a daguerreotype, and the first to hire a press agent. She was also the first first lady to dance at a White House party, and wherever she went she was accompanied by 12 "maids of honor," six on each side, all dressed alike.
As John Tyler only served 1 term, Julia's tenure as First Lady was over in a matter of months, but she left her mark as the "Lovely Lady Presidentress" and was well loved by the media. She then went back to Viriginia and proceeded to have seven children (to add to the eight Tyler had by his first wife). She was a stauch Confederate supporter and lived until 1889.
Posted by Jennie W at 8:15 PM

This was a very interesting post. I'm wondering if you or anyone else out there has read the new Tyler biography by Edward Crapol. Most of the Tyler biographies I've seen are dated (Chitwood, Seager, etc.)

I just found this blog recently and think you all do a wonderful job. Keep up the good work !

I was researching the Gardiner's of Long Island, New York when I came across the story of Julia Tyler's story. My question/comment has to do with her youngest daughter, Pearl. According to what I've read Pearl's mother was forty years old when she was born in 1860. That would have made John Tyler seventy years old. In a time when men and women didn't have seventy plus life spans, it goes to reason he wouldn't have been in the best of health at that age (and he died about two years later.) Was there ever any speculation, documented, about the paternity of their youngest daughter?

Sam Houston lived to be 70 years old, (d. 1863). He married his last wife when he was 40, and fathered 8 children though he was not in the best of health due to the persistent inflamation of wounds from the war of 1812 and the Battle of San Jacinto in the Texas war of independence.

People did indeed live to be 70 and even 80+ years old, and there is no reason to think that President Taylor's wife was anything other than faithful-- they seem to have had a happy marriage.

Unfaithfulness was far less common then than now because people took religion and honor and the sacrament of marriage more seriously than they do now. It is a mistake to judge the values and behaviors of previous eras by modern standards.

In January 1842 when they met bit was at Tyler's daughter's wedding.