I'm still on my White House hostess kick, so I have another for you today.

Hannah Van Buren died in 1819, almost 20 years before her husband became President, of tuberculosis. She left her husband four living sons (she actually had six children), and it was one of her sons' wives who acted as her husband's White House hostess. 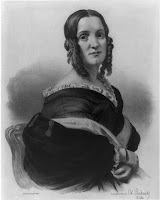 Angelica Singleton met Abraham Van Buren - the oldest son of Martin Van Buren - while his father was President and married him in 1838. They were actually introduced to each other by Dolley Madison, as Angelica was a distant relation of Dolley's. After her marriage, she took up the role of First Lady for her widowed father-in-law. Before she took over the role, Martin Van Buren himself actually placed host to the White House, when he took time for entertaining.

Angelica's efforts as First Lady were popular in Washington. Her most well known coup was charming the picky French minister, Adolphe Fourier da Bacourt. She was not loved by everyone, though, and she was actually used by the President's enemies:
Angelica Van Buren's receiving style of forming a tableau with other young women set apart from the crowds and nodding to them, as well as the alleged plans she had for relandscaping the White House grounds into a plan that replicated those she had seen in the royal houses of Europe were fodder for a famous political attack on her father-in-law by a Pennsylvania Whig Congressman Charles Ogle. Ogle referred obliquely to Angelica Van Buren as a member of the president's household in his famous "Gold Spoon" speech. The attack was delivered in 1841 in Congress and the general depiction of the President as being monarchial in his lifestyle contributed to his failure to achieve re-election during the 1840 campaign.
Angelica's European tastes - and her European honeymoon - would be a continued soft spot for enemies of the Van Buren administration.

While in the White House, Angelica gave birth to a daughter, who only lived a short time. She had three sons after she left the Executive Mansion.

As a side note, in a 2006 interview with ABC, Laura Bush actually made a mistake, calling Angelica Van Buren Angelica Houston by accident, which pointing out her portrait in the Red Room.
Posted by Jennie W at 7:38 AM