The Educational Tour Marm's weekly trivia post, Figure it Out Friday, for last week was the contents of Lincoln's pockets when he was shot. She also notes that the list was actually was in a rock song (which she quotes and links so you can listen).

The oddest thing in his pockets?
But the most controversial article was the Confederate five dollar note which probably was picked up by President Lincoln when he and his son bisited the Confederate Capitol Building (CommonwealthCapitol of Virginia) in the recently fallen Richmond. 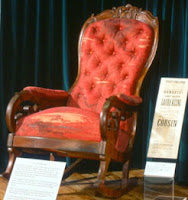 Now to go with this, you can see the chair that Lincoln was sitting in when John Wilkes Booth shot him at the Henry Ford Museum (in Dearborn, MI if you want to see it in person).

You can also see small paper flags which Americans waved at Lincoln's funeral train as it passed as well as a memorial bookmark and a picture of the funeral train.

Lincoln's death touched the nation and his funeral train was a major event. This is what the Ford Musuem writes:
The train, dubbed the Lincoln Special, stopped at major cities along the way. The first day it stopped in Baltimore and Harrisburg, Pennsylvania, and then 300,000 people viewed the body in Philadelphia. In New York City, over half a million people waited to view Lincoln’s body and over 75,000 marched in a huge funeral procession. From there, the train went to Albany and Buffalo, New York, and on to Cleveland and Columbus, Ohio. The train then made its way to Indianapolis and Chicago, where the procession rivaled that in New York City. The funeral train arrived in Springfield on June 3 and Lincoln was buried in Oak Ridge Cemetery the following day.

It is estimated that over a million people viewed Lincoln’s coffin and nearly 30 million, about 75 percent of the nation’s population, watched as the funeral train made its way through the countryside and small towns.

You can also access their entire online exhibit (May 2005 Picture of the Month).
Posted by Jennie W at 10:13 AM

Thanks for the mention!

I thought Good Friday was the appropriate time for this FIOF.

Yes, I have seen that chair and the museum. (I am in the throes of designing a few Lincoln Bicentennial Tours for 2009 and this will be a part of one of them.)

The museum under Ford's is also worth seeing, 95% of student groups hear the Park Ranger talk and then leave!

his coat, which was ripped/cut by the surgeon is there. The Brooks Brothers quilted lining can be seen. The single shot Derringer used by Booth. The original door with a hole bored in it. And other memorabilia is displayed.

You ought to read a bit of Walt Whitman. He almost chronicled the funeral train and also wrote about the scent of Lilacs and how they would always remind him of the death of Lincoln.

Hope you had a blessed Easter!

Michael, feel free to republish without link (I haven't got the original post saved I'm afraid, so can't do so myself). I understand how much spam gets posted on blogs, I thought I'd include the link to my site as it is highly relevant (being on the exact same topic), but with the risk of spammers seeing it as an open invitation to post links to sites on unrelated topics which mostly seem to have something to do with impotence, I can see why you didn't approve it.

Hope you like my site, I'm still working on it (all the exclusive biographies are up, I'm currently adding the official Whitehouse biographies and hope to add galleries, speeches, quotes and books soon, as well as possibly biographies from public domain encyclopaedias such as the 1911 Britannica).

Lincoln was indeed a fascinating character, he was not only the tallest of all the American Presidents, at a staggering 6'4" (a whole foot taller than the shortest, Madison), but also has one of the best 'rags-to-riches' stories of all the presidents, working as a farm labourer when he was 16 but going on to become president. The funeral train picture is indeed impressive, thank you for posting this. Did you know that the funeral train travelled 1,654 miles - an impressive distance, but by no means one that one cover the entire USA - for 75% of the population to be able to seen the train making it's way through the countryside, it shows the dedicated the people had towards their president.

Why thank you!
And I'll do the same!