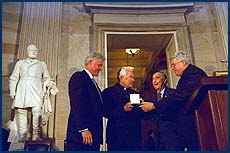 (President Bill Clinton, Father Theodore M. Hesburgh, Senator Strom Thurmond and Speaker of the House Denny Hastert)
I am heading down to the University of Notre Dame in South Bend, Indiana tomorrow afternoon. I am going with a group of Central Michigan University doctoral students in educational leadership to have a meeting with Father Ted Hesburgh on Friday. I recently read a biography of Father Hesburgh and I am looking forward to talking with him in person.
Father Hesburgh served as Notre Dame's President for 35 years from 1952 to 1987. He holds the Guinness Book of World Records title for “Most Honorary Degrees”, having been awarded 150. He was also awarded the Congressional Gold Medal on December 9, 1999. During his long career, Hesburgh served as a member of the United States Civil Rights Commission from 1957 until 1972 when President Nixon fired him. He also served on the Knight Commission that overhauled college sports from 1990 to 1996.
The picture above is from the ceremony where Father Hesburgh received the Congressional Gold Medal. I watched a C-Span video of the event and found it of interest. The speakers including President Clinton were good although Senator Thurmond embarrassed himself by standing up and announcing loudly that he had to go vote!
Here are some good sites on Father Hesburgh:
Rev. Theodore M. Hesburgh, C.S.C. - From the University of Notre Dame.
Theodore M. Hesburgh - Encyclopædia Britannica Article.
Theodore Hesburgh - From Wikipedia.
Posted by M at 6:15 AM