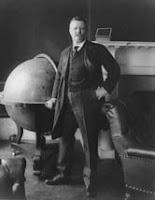 Last week’s Wordless image I published at History Is Elementary involved one of the several Lincoln funeral processions that took place as Lincoln’s body was taken from Washington D.C. to Springfield, Illinois. Now you may be thinking I use this image when my students study the Civil War or Reconstruction, but I don’t.

I wait and use the image to introduce Theodore Roosevelt because it actually works better content wise for me to do so. Take a look at the picture by clicking on the word “wordless” above. The large three-story building on the left (background) is actually the home of Cornelius Van Schaack Roosevelt, owner of a very profitable plate-glass company, the owner of various properties around New York and in 1865 when this picture was taken he was the patriarch of the Oyster Bay faction of the Roosevelt family in America.

Notice the windows on the side. Look closely at the second floor window.

Can you make out the two small figures at the window?

During the procession so many people wanted to pay their respects and get a view of Lincoln’s coffin that people were willing to pay as much as one hundred dollars to secure a good view. The two observers in Mr. Roosevelt’s window, however, did not have to pay for the priviledge because they were his grandchildren---Theodore, age 7 and Elliot, age 5. Elliot was Theodore’s younger brother and would one day be the father of Eleanor, wife of Franklin Delano Roosevelt. My young students get excited about this. They like the fact that a young man who will one day be president is witnessing the funeral procession of another, as well as a future father-in-law of another president. Students begin our study of Theodore Roosevelt with interest levels at full tilt.

Theodore Roosevelt is a rather long name for my young students to write as they take notes so we decide early on to abbreviate his name to TR and that’s how I will refer to him throughout this piece. If I had to come up with a shortlist of presidents I would most like to have lunch with TR would be at the top of the list. His story is such a facinating one that it is easy to understand why so many people have tackeled his life through biography, however, be warned…..a biography of TR can weigh as much as a five pound bag of sugar. He was a very varied individual.

They don't hold White House lunches the way they used to at the beginning of the century. On Jan. 1, 1907, for example, the guest list was as follows: a Nobel prizewinner, a physical culturalist, a naval historian, a biographer, an essayist, a paleontologist, a taxidermist, an ornithologist, a field naturalist, a conservationist, a big-game hunter, an editor, a critic, a ranchman, an orator, a country squire, a civil service reformer, a socialite, a patron of the arts, a colonel of the cavalry, a former Governor of New York, the ranking expert on big-game mammals in North America and the President of the U.S.

All these men were named Theodore Roosevelt.

The quote aptly describes TR, but it leaves out one important factor about his life that I find extremely fascinating. TR had very deep Southern roots of the best kind in my opinion…the Georgia kind. Now that little tidbit of information always perks my young students a bit and they become very interested in their “homeboy”.

It’s at this point that I bring up my main question for students to focus on. What do you think would happen if your father felt very strongly about something and your mother felt just as strongly in an opposite manner? Since divorce is a common factor with the majority of my students you can imagine where the conversation turns, but through the process we determine that we all have been in that type of situation. I remind students that in war we have also seen situations where families are divided. During the American Revolution many of the citizens of Savannah, Georgia split along generational lines with regard to remaining loyal or joining up with the Liberty Boys. It was very common during the revolution for many families to split with some families having members fight on both sides. Every year a few students recall our earlier discussion regarding Benjamin Franklin and his son William. They opposed each other in their thoughts concerning liberty.

I consider it a great moment when I teach something in history that at first glance can be very remote to my students, yet by simply bringing up a seemingly insignificant detail I end up creating a firm connection to our own back door. Within Roosevelt’s parentage is that insignificant set of details that connects a heavily entrenched northern family with an even more heavily entrenched southern family.

While TR hailed from a an old Northern American family of Dutch ancestory that believed in the abolitionist cause and were rabid Lincoln Republicans, the young children in TR’s home were heavily influenced by the romanticism of plantation Georgia by the Southern women who lived under his roof in New York.

Theodore Roosevelt’s mother was Martha or Mittie Bulloch and she hailed from Roswell, Georgia where she lived with her father, Major James Stephens Bulloch and his wife, Martha Stewart Elliott Bulloch. I’ve written about the Bulloch family and their importantance in early Georgia over at Georgia On My Mind in part one of this three part series.

In his own autobiography TR describes his mother as someone who never forgave Lincoln, and she was “totally unreconstructed.” By the time the war began Mittie’s father had been dead for sometime. Her mother and sister moved north to live with Mittie due to hard times at Bulloch Hall. They often spent their days putting together packets of supplies for the folks back home and secured the help of the children including TR. The book, TR: The Last Romantic reports packages would be handed off to agents in Central Park who would then get them placed on ships heading to the Bahamas. From there the packets would be placed with a blockade runner. There are also stories of Mittie hanging the Confederate flag in the window of the Roosevelts’ home in New York City each time she received notice of a Rebel victory.

In his autobiography TR states, “Toward the close of the Civil War, although a small boy, I grew up to have a partial, but alert understanding of the fact that the family were not one in their views about that conflict..”

The book, The Three Roosevelts, contend that Theodore Sr. was an abolitionist, loyal member of the Republican Party, and knew the Lincolns personally. That being so he did not fight against his wife’s family during the war even though he was of an age to do so. Instead he paid $300 for a substitute to fight in his place which was a very common thing for men of his class to do. Some researchers and even TR’s own daughter, Alice, surmise that even though TR professed love and devotion for his father he was secretely embarrassed by his father’s failure to fight and this made him even more adament about standing up and being a “man’s man” as he got older.

While growing up in New York City TR and his siblings were regaled with tales from the Southern women in the household. Of his aunt Anna TR wrote, “She knew all of the “Br’er Rabbitt’ stories, and I was brought up on them. One of my uncles, Robert Roosevelt, was much struck with them and he took them down from her dictation publishing them in Harper’s, where they fell flat. This was a good many years before a genius arose who in “Uncle Remus” made the stories immortal.” The genius TR spoke of was from Georgia as well.

TR and his siblings had two Bulloch uncles who fought for the Confederates. Anna Bulloch, as well as Mittie, loved to tell them of their adventures. David McCullough, in his excellent book, Mornings on Horseback, quotes TR saying, “It was from the heroes of my favorite stories, from hearing of the feats performed by my southern forefathers and kinsfolk, and from knowing my father [that] I felt great admiration for men who were fearless…and I had a great desire to be like them.”

Because both brothers were secret agents during the Civil War they were not afforded amnesty like many Confederates following the war, and they elected to return to Britian where they lived very profitable lives. At some point, however, before the brothers went to Britain for the final time, they came to visit the Roosevelt household. The brothers had to arrive under assumed names. In his autobiography TR calls his ‘ Uncle Jimmy’ a valiant and simple and upright a soul as ever lived who was forgiving and just in reference to the Union forces and could discuss all phases of the Civil War with entire fairness and generosity….he could even admire Lincoln and Grant.”

As the war drug on the Bulloch Hall women in the Roosevelt mansion had much reason they thought to avoid reconstruction. Sherman’s men destroyed the mills of Roswell and their beloved home had been used as a headquarters for the Union army. Mittie’s mother cried for days when Port Royal fell and wailed she would rather die than live under Yankees. There is an unverified story (by me) of Mittie returning to Bulloch Hall in 1868 where the current resident allowed her to take a glass doorknob.

In part three of this series which will be published here at American Presidents next week I will discuss how Theodore Roosevelt’s mix of northern and southern roots influenced his presidency.

Yes, there is much, much more to share regarding Roosevelt's roots in Dixie!
Posted by EHT at 10:08 AM

This is a great piece! I'm just about finished reading The Roosevelt Women by Betty Boyd Caroli and she talks about TR's mother, Mittie, in it and these same points are brought up! I really liked how Caroli talked about how hard the Civil War was for Mittie Roosevelt because of her ties to the South and then the rabid Yankee sentiments of her husband's family. I'm planning on reviewing the book when I finish it here at the APB.