Last weekend, I went down to the James K. Polk Home in Columbia, Tennessee. My first caveat – August in Tennessee is NOT enjoyable to a northern girl like me. It was a 105 there! 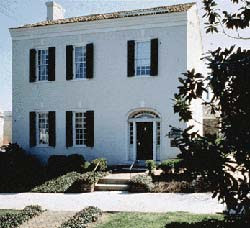 Source: James K. Polk Home
This is not the residence of the Polks, but rather James Polk’s parents’ house. Both houses the Polks lived in – in Columbia and in Nashville have been torn down. This house was built in 1816 and has been restored and furnished with pieces from the Polks’ various residences as well as some of Polk’s family pieces. 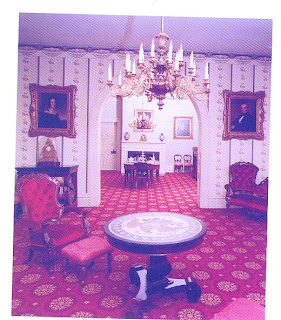 Source: A Special House booklet
This double parlor is gorgeous. The chandeliers are from Polk Place in Nashville and Sarah Polk paid $54 each for them – quite extravagant at the time. The dining room table in the far room is also from Polk Place and pulls apart into two separate tables or can be set up as one large table, as it is currently. 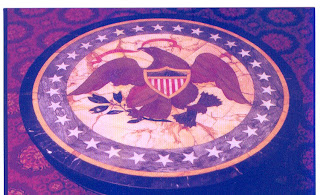 This is a close up of the table from the picture. This is Egyptian marble in a mosaic design. It was given to President Polk upon his retirement. 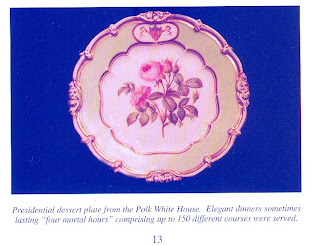 Source: A Special House booklet
Sarah picked this china out for the White House (this isn’t state china, which there also is a Polk version of). The flowers were all from Tennessee and see the little symbol at the top? That’s the presidential seal and Sarah was first to use it.

Now I don’t have a lot of pictures from the interior, since there is no photography in the house, but the tour also includes several rooms upstairs. One room is done as James’ study and has some of his original books and his glasses. There are also several of Sarah’s dresses on display. They also have pieces of Sarah’s jewelry, one of her canes and several lovely fans. 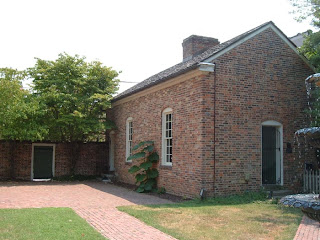 This is the detached kitchen. The kitchens were separate to keep the house cooler in the summer and to help prevent fires. The slaves (this was Tennessee and the Polks were slave-owners) would bring the food into the main dining room through the back door. 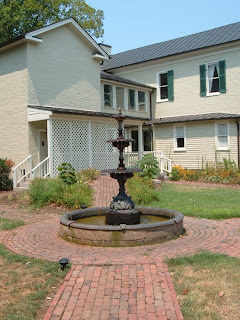 This is a cast iron fountain in the back courtyard. It came from Polk Place and was made in 1820. 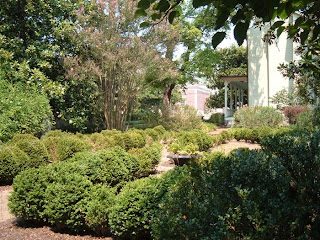 Many of the plantings in the gardens are descendent plants from Polk Place. The gardens also include statues representing the four seasons. 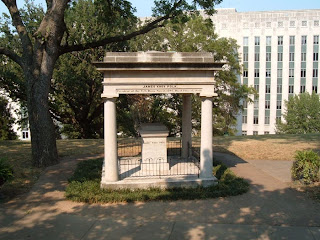 The Polks are buried on the grounds of the state capitol in Nashville. Polk was not originally buried here, but moved later.
Things to Remember When Visiting:
Posted by Jennie W at 12:51 PM

Me and my family visited the Polk Home this past weekend. It was free commemerating his birthday. It was very interesting. I have lived in Columbia my entire life and this is the first time I have been here.

I would like to go back again. We got there kind of late and the tour was just about over, so we didn't learn much. What we did learn was very interesting.

I would recommend that if you're in town to stop by the Polk home, but I would make a trip here just to see it. Unless you are an historian whose interested in this kind of stuff.

Thank you so much for these pictures! One of my dreams is to get to the Polk home on vacation, one of these days.