To go with the post I put up yesterday, I thought I’d focus on White House weddings today. 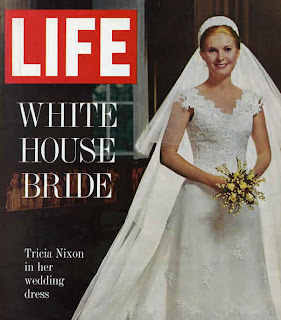 One of the most well known White House weddings was Tricia Nixon’s Rose Garden wedding in 1971. While Julie Nixon Eisenhower was a popular and social first daughter, Tricia so completely avoided the press, that she was called the “Howard Hughes of the White House.” The one occasion where she came out of her shell was for her wedding. Time Magazine ran an article on Tricia’s impending marriage and reported on some of the story of their courtship:
They became secretly engaged two years ago; since then the romance has gone on from coast to coast, from the Cox family estate in Westhampton Beach, L.I., to San Clemente, from Camp David to Key Biscayne. She has visited Cox frequently in Cambridge, Mass., where they customarily dine—surrounded by Secret Service agents—at small, inexpensive restaurants or at Lincoln's Inn, a law-school social club. Last Thanksgiving Cox asked Nixon for his daughter's hand. "Eddie was white as a sheet," Bebe Rebozo, who was standing by, recalled; her father, Tricia said, was "speechless for a moment—you know how fathers are." Since just before Christmas, Tricia has been sporting a diamond-and-sapphire ring, an heirloom first given to Cox's maternal grandmother. Eddie is 24, Tricia 25—only seven months apart.