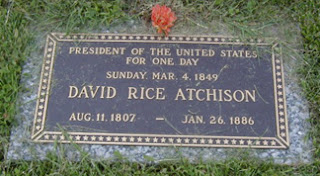 There is an annoying bit of presidential "trivia" that keeps coming up when I am surfing online. Namely, it is the myth that a Senator from Missouri (David Rice Atchison) was President of the United States for one day on March 4th, 1849.

The claim is that Atchison technically was President of the United States as President James Polk's term expired at midnight, March 3rd. President Zachary Taylor refused to be sworn into office on a Sunday, March 4th. Taylor's Vice Presidential running mate, Millard Fillmore, likewise was also not inaugurated. The theory then goes then that as President Pro Tempore, under the presidential succession law in place at the time, Atchison was President on March 4th.

Alas, the theory makes no sense. This is just bad history. David Rice Atchison never took the oath of office on March 4th, 1849 either. It does not matter that he was third in line to the presidency. There was no president on March 4th, 1849 if the basis of this debate is on who took an oath of office to be president. Either there was no President on this day or Zachary Taylor was technically President even though he had yet to have taken the oath.

Atchison himself kept this in perspective although he believed he may have been President. He wrote:

"It was in this way: Polk went out of office on the 3d of March 1849, on Saturday at 12 noon. The next day, the 4th, occurring on Sunday, Gen. Taylor was not inaugurated. He was not inaugurated till Monday, the 5th, at 12 noon. It was then canvassed among Senators whether there was an interregnum (a time during which a country lacks a government). It was plain that there was either an interregnum or I was the President of the United States being chairman of the Senate, having succeeded Judge Mangum of North Carolina. The judge waked me up at 3 o'clock in the morning and said jocularly that as I was President of the United States he wanted me to appoint him as secretary of state. I made no pretense to the office, but if I was entitled in it I had one boast to make, that not a woman or a child shed a tear on account of my removing any one from office during my incumbency of the place. A great many such questions are liable to arise under our form of government." (September 1872 issue of the Plattsburg Lever.)

This is a bit of bad history that annoys me. However, I guess it is harmless. It is kind of like saying Texas is not legally part of the United States because technically a Joint Resolution of Congress can not be used to annex territory under international law. Read the Legal status of Texas article at Wikipedia if you want to see how some have fun with de jure (technically) versus de facto (in reality). Maybe Atchison was the only de jure President of the United States who was not also de facto? Kind of meaningless but good for unproductive history debates I guess.
Posted by M at 6:32 PM