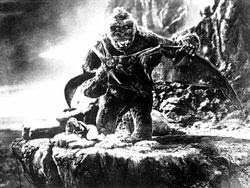 It seems every year, crazy leaders of antagonistic countries come to the United Nations and make outrageous speeches. President George W. Bush got hit last year by Venezualean President Hugo Chávez who called him a devil. This year, Iranian President and Holocaust denier Mahmoud Ahmadinejad railed against "selfish and incompetent" powers that have "obedience to Satan." I guess Bush and the USA is somewhat diabolical in his view.

This has all happened before. In 1950, according to the International Times Tribune, Wu Xiuquan, a Chinese representative, denounced the Truman administration effort to promote Taiwan, saying, "This is a preposterous farce, unworthy of refutation, in which Truman makes a mockery of Truman himself."

This same article noted, "Castro, in 1960 managed to insult two future American presidents at the same time. He described John F. Kennedy as 'a millionaire, illiterate and ignorant' and warned delegates against construing the comment as favoring Richard M. Nixon. 'As far as we're concerned,' he said, 'the two of them lack, should I say, political brains.' "

Probably the most entertaining UN babble came from Cuban foreign minister Roberto Robaina in 1996. He said of President Clinton, "We are facing a King Kong escaped from its cage, destroying and smashing without orientation or control."

Just wait until next year. I am sure that some nut who also happens to be a world leader will entertain the world with a rambling speech denouncing the President. And the year after that. And the following year. It does not matter who the president is and what party he or she will come from. The UN just seems to attract nutty anti-American speeches.
Posted by M at 7:11 PM