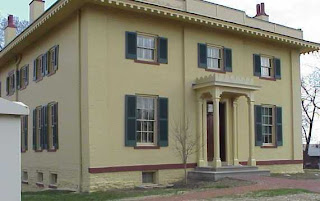 The yellow is authentic.
I visited the William Howard Taft National Historic Site in Cincinnati last weekend. This is his boyhood home, not the home of he and Nellie. This house was bought by his father, Alphonso, and his second wife, Louise Taft (this was Taft's mother in case you were wondering). The Tafts bought the house in 1851 (WHT was born in 1857) two acres (there is NOT still two acres here in downtown) for $10,000. After Alphonso's death, Louise rented it out and then eventually sold it and it was turned into apartments. The National Parks Service eventually came to own it and had to restore the entire building, which included removing an additional story to put the widow's walk back on.

This museum includes a video and several exhibits plus the house tour. There are actually only a few rooms restored to look like the original Taft house and then a museum with exhibits on the top floor. There isn't a lot here, but the NPS has done a nice job with what they have. There is also a lot in this museum on the entire Taft family and their descendants - not surprising considering they are still a power on Ohio (the previous governor of Ohio was Robert Taft II).

The website also offers curriculum materials for teachers. The Taft family believed strongly in education and all the boys received excellent educations and most law degrees. Taft was not only President, but Chief Justice of the Supreme Court. He and his father were both Secretaries of War and several of his brothers and their families also ended up in politics.

Some things to remember if you visit: