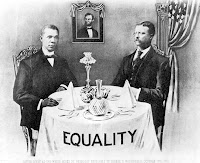 When I taught fifth grade history, students and I made the mad dash for our April finish line covering Reconstruction and ending with the present day. Sometimes I miss teaching such great events as World War I, the Depression Era, and World War II.

When we reached the point where President McKinley is assassinated and Theodore Roosevelt rises to power I share the picture I used several days ago for a wordless image….the one where a very young Roosevelt witnessed the Lincoln funeral procession as it moved through New York City. I also share with students Roosevelt's Georgia roots.

However, students in my fifth grade classroom didn’t meet President Roosevelt for the first time following the McKinley assassination. They met him head on during the Spanish American War. At that time I began my lesson with a plunger. Yes, a real honest-to-goodness, plumber with his pants ridin’ low, plunger. I would ask students to identify what I was holding in my hand and most of them could tell me it was a plunger. They could also tell me some fairly colorful stories regarding how and why a plunger had been used at their house. At any rate I used the plunger to illustrate Theodore Roosevelt’s character.

David C. Whitney in his book American President said, “He did not wait for history to make him great, but plunged ahead doing what he felt was right for the nation and the world.” While it is true that we can sit back now and make judgements regarding Roosevelt’s actions you cannot deny that he didn’t shrink back or second guess himself….he simply plunged ahead.

As president Roosevelt made various diverse appointments in order to reflect the mixture of races, religions, and nationalities in the United States. Catholics, Southern white Democrats, Jews, and Negro Southern Republicans were appointed to various offices.

In October, 1901, one month after being sworn in President Roosevelt invited Booker T. Washington to meet with him at the White House. President Roosevelt greatly admired Booker T. Washington, author of the popular book Up From Slavery which told of his rise from a nine-year-old slave to a great teacher and founder of the first Negro college for teachers. Washington had done what few Negroes had done by 1901, and he was just one of many writers that Roosevelt invited to the White House because he found them so interesting.

In 1901 it was one thing to invite Booker T. Washington to the White House and meet with him. It was an entirely different matter altogether to actually have him to dine in the White House. Southern newspapers went wild with accusations. They accused Roosevelt of planning to place Negroes in control of Southern whites dredging up memories of Reconstruction. Other papers condemed the dinner stating that Roosevelt was simply fishing for black votes. The Memphis Scrimitar said Roosevelt committed “the most damnable outrage ever perpetrated by any citizen of the United States when he invited a n…. to dine with him at the White House." There was even a division of opinion in the North regarding the propriety of the President’s actions, however it was not as rabid as the Southern response. The image posted above is actually a political cartoon that was published at the time.

President Roosevelt did not respond publically to the firestorm of criticism, however, he was very surprised by the reaction in that his invitation to dinner was totally unpremeditated. In a letter to Albion W. Tourgee dated November 8, 1901 President Roosevelt stated "...and the very fact that I had a moments qualm on inviting him because of his color made me ashamed of myself and made me hasten to send the invitation….I have not been able to think out any solution of the terrible problem offered by the presence of the Negro on this continent, but of one thing I am sure, and that is that inasmuch as he is here and can neither be killed nor driven away, the only wise and honorable, and Christian thing to do is treat each white man and each black man strictly on his merits as a man giving him no more and no less than he shows himself worthy to have."

President Roosevelt got the message loud and clear from his mother’s beloved homeland and he never repeated the error again during his time in office not wanting to offend half of the voting population in the United States. He also wrote “I do not intend to offend the prejudices of anyone else, but neither do I intend to allow their prejudices to make me false to my prejudices.”

One of the things I find so interesting about this entire interlude during Roosevelt presidency is the fact that Reconstruction had been over for approximately twenty-four years. This amount of time to my particular students seems like eons since they are only ten years old. Even though I attempt to show students the failures of Reconstruction----it was not a true time of creating bridges between the races in the South---- most don’t understand it at the time. Most believe the war was over, the slaves were free, Reconstruction occurred, and when the Federal soldiers went home in 1877 all was well. Seems like after twenty-four years people could forgive and forget, huh? Students see in this sliver of President Roosevelt’s term in office that Southerners weren’t so easy to forgive and forget. Unerstanding this helps them later to understand that Civil Rights was not merely a thing of the 1960s involving Dr. King, but had real roots leading back in time.

I also find this time period in Roosevelt’s presidency interesting because he faced his Southern roots dead on and unfortunately there isn’t much in the several tomes on his life about the influence the South had on his formative years even though they are all several inches thick. One story I did run across told about a man approaching Roosevelt while he was still in college in order to return to him property of the Bulloch family that had been taken by Union officers as they camped in and around Bulloch Hall.

President Roosevelt visited a few Southern cities in October, 1904, three years after the Booker T. Washington dinner. He made the trek to his maternal family’s home in Roswell, Georgia. Due to his background it is fitting that he was the first sitting United States president to visit the South since the end of the War Between the States besides President Lincoln’s trip to Richmond, Virginia a few days after the surrender.

At Bulloch Hall he spoke as follows:

"It has been my very great good fortune to have the right to claim my blood is half Southern and half Northern, and I would deny the right of any man here to feel a greater pride in the deeds of every Southerner than I feel. Of all the children, the brothers and sisters of my mother who were born and brought up in that house on the hill there, my two uncles afterward entered the Confederate service and served with the Confederate Navy.

"One, the younger man, served on the Alabama as the youngest officer aboard her. He was 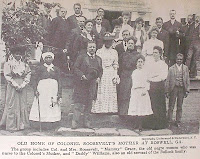 captain of one of her broadside 32-pounders in her final fight, and when at the very end the Alabama was sinking and the Kearsarge passed under her stern and came up along the side that had not been engaged hitherto, my uncle, Irvine Bulloch, shifted his gun from one side to the other and fired the two last shots fired from the Alabama. James Dunwoody Bulloch was an admiral in the Confederate service. ...

"Men and women, don't you think I have the ancestral right to claim a proud kinship with those who showed their devotion to duty as they saw the duty, whether they wore the grey or whether they wore the blue? All Americans who are worthy the name feel an equal pride in the valor of those who fought on one side or the other, provided only that each did with all his strength and soul and mind his duty as it was given to him to see his duty."

The picture above was taken on the steps of Bulloch Hall during Roosevelt's visit and was published in the local paper.

Invaribly every year I’ll have several students ask me about honoring Confederate dead and recognizing ancestors that may have fought for the South. Are they and their families wrong to do this? Should it be done at all? First of all I tell them it’s not up to me, and my opinion doesn’t matter. These are decisions for their family to make. Then I like to share with them President Roosevelt’s speech to show how he reconciled his own southern roots.

I didn't know TR was also of Confederate lineage. Interesting story about Irvine Bulloch, Do you know anything about James Bulloch?

Very enlightening post. We happen to have just watched a series on the Spanish American war whose name is escaping me at the moment. TR is one of my favorite presidents for many reasons, not the least of which is how he related to those around him. I had not read of the encounter with Booker T. Washington, though. It only increased my esteem.

As a southerner who has since lived in many parts of the country and actually worked to uproot the deep prejudices that I grew up with, I can empathize. Although honestly, in some ways I have encountered as much prejudice in other areas, it is simply different - not quite as in your face!