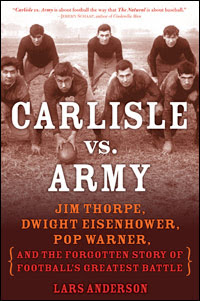 In 1912, Dwight Eisenhower was a cadet at West Point and a member of the Army football team. That year, the football team from the Carlisle Indian School came to West Point to play. The team was coached by Pop Warner and featured Jim Thorpe of Olympic fame.

A book by Lars Anderson is dedicated to this game. It is titled Carlisle vs. Army: Jim Thorpe, Dwight Eisenhower, Pop Warner, and the Forgotten Story of Football Greatest Battle. An excerpt from the book can be found here.

The future president is featured prominently. He intended to make his mark by taking Thorpe "out" of the game. The book notes, "For Eisenhower, this was his chance to create his West Point legacy. Football was the single most important thing in Ike's life, and his reputation as a player who was as relentless as the wind had grown each week of the 1912 season. If he could stop Thorpe -- or, better yet, if he could knock Thorpe out of the game with a blockbuster hit -- Ike didn't believe there was any way his team would lose. Ike always loved challenges, and no challenge in his sporting life was greater than taking on an Olympic legend and the other Indians who were as swift as antelopes."

At halftime, Ike proposed a plan to a teammate. Anderson wrote, "To pull this off, Eisenhower proposed to Hobbs that they give 'that Indian' Thorpe the 'one-two' early in the second half. The 'one-two' meant that Eisenhower, with all the ferocity he could stockpile, would smash into Thorpe's chest while Hobbs plowed into Thorpe's legs as hard as he could. They hoped that the shattering blow would send Thorpe to the sideline -- if not the hospital."

Alas for Eisenhower, the plan backfired. Instead, in attempting to tackle Thorpe, he collided with Hobbs and they both had to leave the game! Carlisle won the game 27-6 much to Ike's chagrin.

This looks like a good book both for presidential and American football history. I will be ordering a copy for the library.
Posted by M at 11:34 AM