I promised a follow-up to my in-law question last week. I asked about James Garfield’s in-laws, the Rudolophs. I was up at the Garfield Home a few weekends ago and was quite impressed by the beautiful house and grounds so thought I would share with you. Lawnfield was the name given the house by reporters covering the 1880 election, the Garfield family simply called it the “Mentor Farm.” 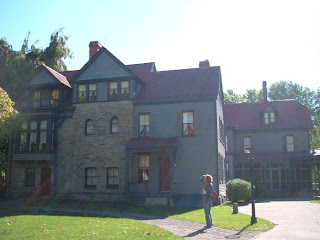 Side View (my picture)

The James Garfield National Historic Site is in Mentor, Ohio, which is up near Cleveland. It is part of the National Park Service and the Western Reserve Historical Society. As a note, although this is the Garfield house, they are not buried here (or even in Mentor). James and Lucretia Garfield are both buried in Cleveland (their daughter Molly and her husband are also there) at Lakeview Cemetery. There is a HUGE monument there if you are ever in the area plus other famous graves (like John D. Rockefeller).

The Garfields bought this house in 1876 because James wanted a farm. The house immediately underwent renovations, going from 9 rooms to 20 rooms. This is the house from which Garfield ran his “front porch” campaign and the house was abuzz with campaign activities through 1880. A small building on the grounds was converted into a campaign office, complete with a temporary telegraph.

James Garfield only served a short time before being assassinated and so never returned to his home after his election. It was Lucretia who continued the renovations and even added a memorial library and vault for all her husband’s papers to the house.

Now the interior of the house is a gorgeous testament to Lucretia Garfield’s style. You can take an online tour if you want to see these lovely rooms. Not only did the Garfield family live him, but James’ mother, Eliza, and Lucretia’s father, Zeb, both resided here. 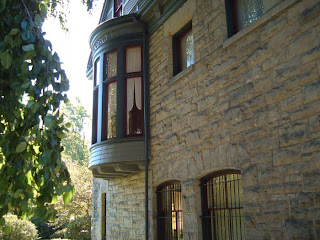 Wedding Window from the outside 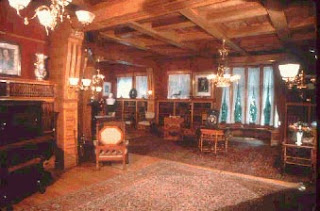 The white oak in the house (especially noticeable in the memorial library) is fabulous. Now if you look across this room you will see the circular window (picture from the Western Reserve). I also provided a picture (this one is mine) from the outside of the house. In 1888, Mollie and Harry Garfield both got married here in a double wedding. 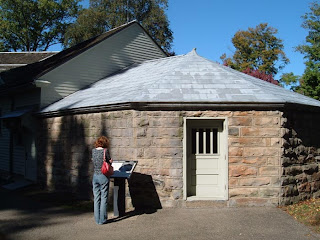 In addition to everything on the inside, there are also a lot of great outbuildings. During the renovations, natural gas was found on the property, so Lucretia had a gas house built and the house was set up to receive it – quite modern of them! I’ve included a picture of the gas house as well as part of the sign (also mine) that shows how the gas was pumped into the house. 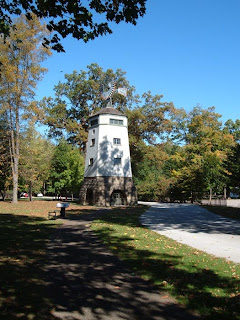 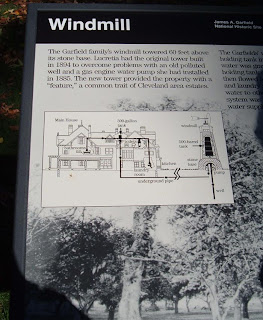 Another innovation was the windmill Lucretia had added. I actually talked about the building of this feature in an earlier post as well. As with the gas house, I’m including a picture of the windmill and then a portion of the sign (also mine) to show how the water was moved from the windmill into the house, giving the Garfield family water in the house.

This house is well worth the time to visit and tour, but if you aren’t going to be in Ohio any time soon, at least take the virtual tour!

What to remember when visiting Lawnfield: