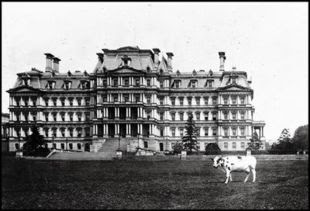 Pauline Wayne was a cow owned by President Taft. According to Wikipedia (yes, the cow has an entry), "From 1909 to 1913 Miss Wayne freely grazed the White House lawn. She was the last presidential cow to live at the White House and was considered as much a Taft family pet as she was livestock." The 1909 date may be wrong as the New York Times announced her arrival at the White House in 1910.

Pauline was quite famous for a cow in her days. Her coming and going was reported by the media. The New York Times covered her extensively. Her departure in 1913 warranted a headline on February 2nd titled "TAFT COW ON RETIRED LIST.; Pauline Wayne Goes Back to Her Old Wisconsin Farm." The article noted, "Pauline has not been in the best of health in several months. President Taft believes that if she is taken back to Wisconsin and put on Senator Stephenson's farm again, her youthful vigour will revive. The Senator was glad to recover Pauline, as she had supplied milk to the family of the President for two years, and he thought she would add dignity to his herd."

Other facts about Pauline Wayne:

- She was a Holstein-Frisian cow.

- She was shipped to the White House in a large crate on an express car on a train.

- Pauline's Aunt (Gertrude Wayne) held a world record for butter and milk production. Pauline herself only produced seven and a half gallons of milk a day.

- Pauline was pregnant when she arrived in Washington. I have been unable to determine the fate of the offspring.

- The William Howard Taft Papers at the Library of Congress include a file on Pauline.
Posted by M at 7:01 AM

I'm so glad to see a post on Pauline - everyone seems fascinated by this pet on our current poll!

Yeah, I may inadvertently be getting her more poll votes too by posting this now!

I had a cow as a pet when I was kid. I loved my cow. What was so cool is I didn't live on a farm. I have given a poll in my classroom before on Presidents and their pets. Pauline is always a huge favorite and is at the top of the votes even though techically she wasn't a pet.

Princess Pauline Wayne was born on a farm in the township of Somers in Kenosha County Wisconsin in July, 1906.
According to a Kenosha Evening News article of May 24, 1910, Pauline was given to the Tafts by Wisconsin State Senator Isaac Stephenson, a friend of the family. She replaced their cow Mooly, who died about a month earlier. Pauline was due to arrive at the White House on July 1, 1910. Stephenson had boasted that she could produce about 25 pounds of butter a week.