Whose in-laws are these?

HINT: The President in question was from Ohio (while there were a lot of Presidents from Ohio, between the century and the state, you are down to a multiple choice question on this one). 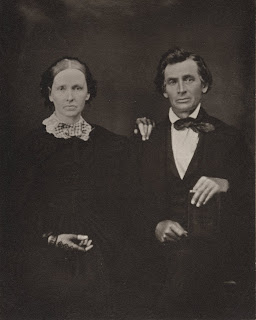 As per Michael's suggestion last week - which 19th century President had this couple as his in-laws? Now I have a hint for this that will narrow it done considerably (make it more of a multiple choice question), but we'll start with nothing beyond the century timeframe and see if anyone can get it from there first. I also have a post to go with this picture after we figure out who this couple is.
Posted by Jennie W at 10:23 AM

No, these aren't the Appletons (Franklin's in laws). But thanks for guessing!

Garfield with the in-laws being Zeb and Arabella (Mason) Rudolph. This one was hard!

Absolutely! Yes, this one was definitely difficult. You can find their pictures with an archival collection at Hiram College (which is where Garfield met his wife, Lucretia Rudolph). Look for a post on the Garfield's house coming soon!