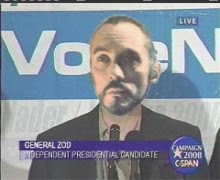 The authors of this blog do not make endorsements of current Presidential candidates. We also do not give extensive coverage to any of their campaigns. However, the Presidential candidacy of General Zod (originally from the planet Krypton) is unique and worthy of coverage. Full details from the Zod campaign can be found at Zod 2008.

General Zod came to the Earth in the early 1980s. He attempted to conquer the world but got his butt kicked by Superman. He has apparently reformed himself and is now seeking the Presidency of the United States via the ballot box.

His site features his campaign platform. Is anyone familiar with the idea of benevolent fascism? He notes that he does not take orders. He gives them. Both Congress and the Supreme Court will have their power restricted under his administration. Personally, I think this may be unconstitutional but I can see how this may appeal to many voters.

In an attempt to reach voters, he has an "Ask the General" section. Sample Q&A: Question: Hey, Zod, dude - Last time I checked, the Constitution of the United States said you have to be a natural-born American citizen before you can be president. Your bio says you were born some place called Krypton. Zod's Reply: Do you propose proof that I was born on Krypton? I don't think you can. My birth certificate comes from, well, shall we say, Laredo? I have friends there. The same ones who assist with new workers from Mexico. With that said, I challenge you to undo my citizenship. Yes, I, General Zod, was born in Laredo, Texas. Make no mistake about that! Swear allegiance to me and surrender your vote!

He also has a Kids page. It should get the interest of the younger set. From the Fun with Math section: An uprising occurs in a city with 100,000 people and one percent of them are jailed. If 100 people can be re-educated in one month, how long will it take before everybody is free again?

Can Zod bring the country together? Could both Republicans and Democrats unite behind him and let Zod solve all the world's problems? I am skeptical. But as the first major candidate of non-Earthly origins, his candidacy may be historic. Stay tuned.
Posted by M at 5:50 PM