I’ve wanted to write about President Franklin D. Roosevelt’s last days for sometime, and this week seemed appropriate. I had once again reached a point where I was uncertain about my wordless image and what I would post, and I had to look through my research in an attempt to pull something from my….from my…..well, let’s say from my notebook. :)

Time ran out and I had to think quickly on my feet. This can occur when you have a necessary but boring vocabulary quiz planned and you find out the superintendent of schools will be in your room along with other visiting dignitaries in twenty minutes to see something “stimulating.” Luckily my dilemma wasn’t that serious and I’m awfully glad I spent some time during the summer to research various topics.

In my wordless image over at History Is Elementary readers were given the assignment to provide me with information about the image, and just like my classroom students they didn’t disappoint me. Readers came up with some wonderful bits of knowledge regarding FDR, and some were so brave to leave a comment indicating they didn’t know anything about the image…well, I’m impressed with their honesty.

In my classroom I appreciate and students learn to appreciate mistakes and the “not knowing” because we are then given a precious gift….the opportunity to learn something.

What a gift to give yourself, eh?

In the responses commentors provided information such as FDR was our 32nd president, he served more than two terms (four actually), led us through the Depression with programs like the CCC, instituted Social Security, and led us through World War II. Roosevelt went to Harvard, had polio, married his cousin, and at one time was Assistant Secretary to the Navy. A couple of Georgia participants reminded us that he had a huge impact on Georgia. I’ve written about his impact before as well some family connections here and here. 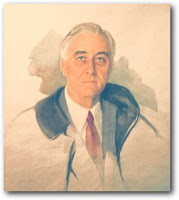 The unfinished painting of President Roosevelt was by Elizabeth Shoumatoff, and it represents the last moments of his life since he suffered from a cerebral hemorrage on April 12, 1945 while the President sat for the picture at Warm Springs, Georgia.

It is no secret that FDR loved Warm Springs and visited there often. At the time of his death he had been returning to his adopted Georgia home for over thirty years. The people of Warm Springs and the surrounding area loved FDR. The first picture with this post is FDR in his car speaking with Georgia farmers.

It is also no secret that for sometime FDR had had a relationship with Lucy Mercer Rutherfurd. They had first met when the President was Assistant Secretary of the Navy and Ms. Mercer (at the time) was Eleanor Roosevelt’s social secretary. Ms. Mercer often joined the Roosevelt’s in social situations when an extra female was needed to round out the party. After some time Eleanor did find out about the relationship and gave FDR an ultimatim…end it or divorce. Roosevelt’s mother also told him that if he divorced he would be disinherited. The relationship ended for a time, but it did eventually resume in secret. By this time Eleanor had basically begun a life of her own, so perhaps this is why the secret was kept for many years.

During FDR’s last trip to Warm Springs Lucy Mercer joined him for some of the time along with two Roosevelt cousins (Margaret Suckley and Laura Delano). Some sources state Anna Roosevelt, the daughter of FDR and Eleanor Roosevelt was also at Warm Springs. After the relationship had resumed she often was the go-between in arranging visits with Mercer for her father.

The President arrived in Warm Springs on March 30, 1945. He was not a well man, but very few knew it. After the 20 hour train trip from Washington D.C. Roosevelt greeted hundreds at the station. His physicians hoped the trip would provide needed calm and quiet. The next day Roosevelt felt well enough to read through several newspapers and dictate responses to various letters, however by late afternoon he was utterly exhausted.

The President attended Easter services on April 1, 1945 even though it took him over one hour to get ready with the assistance of his personal valet, Arthur Prettyman. The next day the President was very involved with war business. He conferenced with the press and then communicated with Stalin and Churchill. Visitors to Warm Springs included the President of the Philappines and Secretary of the Treasury, Henry Morganthau.

By this time Lucy Mercer Rutherfurd had arrived for her visit (April 8th), and some sources state it was she who brought artist Schoumatoff to paint the President’s portrait. It was a common practice for Mercer to visit the President when he was at Warm Springs since it was one place Eleanor Roosevelt rarely went. On April 11th the President and Mercer had a picnic together at Dowdell’s Knob.

On April 12th many citizens of Warm Springs were busy preparing a bar-b-que and patients at his polio center were rehearsing a performance in hopes that the President would be able to attend. President Roosevelt was sitting for Ms. Shoumatoff while going through some papers and chatting with Mercer.

At one point he announced that he had a terrific headache and when he slumped it was Mercer who got to him first asking, “Franklin, are you alright?” Because of his problems with high blood pressure the doctor immediately thought the President had had a stroke, however, they brought in an internist from Atlanta named Dr. James Paullin.

In Dr. Paullin’s report he recalled the President was [near death] when he reached him. He was in a cold sweat, ashy gray, and breathing with difficulty…He was propped up in bed. His pupils were dialated and his hands were slightly cyanosed.

At some point Lucy Mercer was encouraged to leave Warm Springs and she did. Near Macon, Georgia she found out that FDR had died. The public never knew she had been at FDR’s side until years later.

Upon hearing the news concerning the President’s death Eleanor Roosevelt flew to Georgia. Once she arrived she discovered the truth about Mercer having been at Warm Springs. It is said she spent some time alone with his body and then emerged from the room dry-eyed and stoic. A book by James Crutchfield (which I used for most of my research) called It Happened in Georgia, states she removed her wedding ring and placed it in the President’s hand.

It had been a long stranding tradition for Roosevelt to greet people at Warms Springs upon his arrival and departure. The tradition continued even in death. As a military escort from Ft.

Benning escorted the President’s hearse down the drive there were anguished moans and cries instead of loud greetings. The picture seen to the left is of Graham Jackson. He had often played for President Roosevelt and had even rehearsed his portion of a minstrel show for him the night before. Jackson stepped from the crowd and began playing Dvorak’s Goin’ Home as Roosevelt’s copper-lined coffin was placed in the hearse to begin the long trip to Washington D.C. This photo is one that many saw in Life magazine in 1945. The website Atlanta Time Machine has more information about the photo and the performance Roosevelt might have seen at the bar-b-que had he lived.

The train bearing the President’s body back to Washington D.C. left Georgia on April 13th. A crowd of hundreds saw the train off from the station and many Georgians stood along the track to pay their respects.

I grew up in a tiny little dent in the road called Red Oak, Georgia and the train track that Roosevelt’s last trip from Warm Springs traveled on ran right in front of my home. I’ve often wondered how many people stood along that same track I balanced on, placed pennies on, and skipped along growing up. In fact, the very road I lived on was and is still called Roosevelt Highway.

It has been written that Eleanor Roosevelt was very moved by the many hundreds of Georgians that lined the tracks through south and central Georgia to Atlanta. She had never really participated in the President’s efforts at Warm Springs and the surrounding countryside, but because of their response she clearly understood how much Georgians loved the President.

Ralph McGill, a writer for the Atlanta Constitution was not in Georgia when the President passed, but later stated:

"To a Georgian far from home there was a sudden and bitter nostalgia for home at the news of the President's passing in Warm Springs. I could see the dogwood in bloom and the green of the trees. I knew that the peach blossoms were out and that the warm Georgia sun had been like a benediction to the tired body of the ailing president. And I wanted to be home with my own fellow Georgians as they mourned him. It was said of Abraham Lincoln when death claimed him that a tree is measured best when it is down. So it will be with Franklin D. Roosevelt. The tree is down and the historians will begin to measure and will find what the hearts of millions of Americans and peoples of the world already knew, that here was the tallest man America has ever given the world."
Posted by EHT at 3:19 PM

This report doesn't include important facts such as his profound weight loss for 1 year prior to death.