A Hop, Skip, and Jump...Right Over Hoover 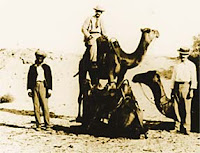 Textbook committee meetings, vertical team meetings, and grade level conferences where teachers from across a school system get together to discuss standards, content, and unit planning are wonderful opportunities for educators to share and learn from each other.

During one such meeting my group of fourth and fifth grade teachers (two with veteran status, one middle of the roader, and one first-year teacher) was to take our standards for social studies and group them according to like characteristics, create key questions to guide a unit, and brainstorm ideas for implementing and assessing the standards.

We had discussed the 1920s and were grouping together the standards for the 1930s when I asked about the actual transition from the Roaring 20s to the Great Depression. It would make sense that children would have questions concerning how America went from Eddie Cantor’s Makin’ Whoopee to I Got Plenty O’ Nuthin’.

I pointed out to the group the particular standard that begins the study.

Standard SS5H5 states….The student will explain how the Great Depression and New Deal affected the lives of millions of Americans. Element (a) of the standard continues….discuss the Stock Market Crash of 1929, Herbert Hoover, Franklin D. Roosevelt, the Dust Bowl, and soup kitchens and another standard for the Economics strand (SS5E1b) states…explain how price incentives affect behavior and choices (such as monetary policy during the Great Depression).

I mentioned that in the past I had generally ended my look at the 1920s by allowing students to discover President Herbert Hoover and the results of the 1928 election. Here are the responses I received after saying that:

“Hoover, didn’t he cause the whole thing? He’s just a blip in the road.”

“All the textbook says is how Hoover didn’t understand there was problem and he just kept telling people good times were around the corner. Didn’t his policies actually make things worse?”

“Policies? Didn’t FDR get elected because Hoover had no policies?

Poor Hoover. He’s often hopped over, skipped over, and jumped on as the poster child of how a President should not act in a time of crisis. In their zeal to cover President Franklin D. Roosevelt and his New Deal policies teachers teach American schoolchildren next to nothing about our thirty-first president. Most students learn very little about Hoover until they reach highschool or take American History during their core college courses, and even then it can be a bit sketchy.

My fellow educators are missing a great opportunity to invoke interest and motivation to study historical figures by glossing over President Hoover as they transition between the decade of excess to the decade of less.

As stated before one of the main questions students have about the 20s and the 30s is how things seemed to be so great at one point and so bad at another. This question also lends itself to President Hoover as well.

I like to pose questions for students to ponder as they explore some well chosen evidence that I have prepared for them. This is also known in more formal education circles as the mystery or inquiry strategy where the teacher determines a situation that lends itself to a mystery and prior to presentation he or she must develop a clear idea of what students will discover. Clues and information sources have to be determined as well as the method of assessment. Finally, students reflect upon the uncovered material and how it relates to other parts of the curriculum.

Look at the picture I’ve posted with this article….men on camels. What does this have to do with Hoover, American History, and even the Great Depression? What about a copy of a ship’s log dated 1897 indicating a destination of Perth, Australia…one of the entry names is Herbert Hoover, age 35 along with a copy of a birth certificate that also has the name Herbert Hoover and his birth date. Yet once students are prompted to check the dates Hoover’s age on the ships’s log and the birth date on the birth certificate don’t match up? What about a series of newpaper headlines from October, 1929 onward? What about a copy of a New York Times article detailing the ten most important Americans prior to World War I mixed in with images of Hoovervilles and an article regarding the Bonus Army episode during June, 1932?

Through the examination of other documentation students also learn the following:

In his early 20s Hoover used his degree in geology to begin a career in mining. Later Hoover crossed the Mississippi River for the first time and embarked on a journey that took him across the world to Australia. He trekked across the Great Victoria Desert via camel to the small mining town of Kalgoorlie where the streets were kept wide to accommodate the sweeping turns of camels. Hoover had been sent to Australia by Beswick, Moreing and Company, a mining company out of London, England. They had wanted an older, more established man for the job so Hoover grew a mustache and beard and stated he was 36 instead of 23. He convinced the owners of the company to invest their money in the Sons of Gwalia mine for a price of 200,000 pounds. He also managed to convince the company that he had a plan to develop the mine. He was given the right to manage the development process contradicting mining policies which stated managers had to have at least three years experience. Hoover must have had some great skills of persuasion and a real knack for mining. Over the next few years Hoover built a fortune for himself due to his mining efforts. President Hoover is considered to be something of a hero in Australia even though he didn’t stay long at the mine. Today, his home overlooking the mine is a museum and a bed and breakfast. The museum homepage is interesting as well as an online article called Into the Outback: How Herbert Hoover Made His Name and Fortune in Australia by William J. Coughlin.

In 1914, Hoover was responsible for helping to return over 100,000 Americans who became stranded in Europe at the outbreak of World War I. Food, clothing, and steamship tickets were provided. He served on the Committee for Relief in Belguim and he traveled to Europe and met with German leaders to persuade them to allow relief efforts to reach their citizens. The Finns added the word “hoover” to their language. It meant “to help”. President Woodrow Wilson appointed Hoover as the head of the American Food Administration. Hoover stated that “Food will win the war”, and it was during World War I, not World War II, that Meatless Mondays and Wheatless Wednesdays were initiated. Following the Great War, Hoover reached national hero status and was named by the New York Times as one of the ten most important Americans. He utilized the American Friends Service Committee to send aid to Germany and Bolshevist Russia and more often than not begged to have his name deleted from any of the relief efforts.

So the question students are really attempting to answer through this example of the mystery strategy is...how does one adventurous problem-solver who becames a national hero known for helping people in need end up taking the blame for economic upheaval and strife in his own country? How can that happen? By carefully choosing images and snippets of documentation regarding Hoover’s early life and by posing questions to guide students at certain pivotal points during their discovery they can embark upon a journey where they arrive at their own realization regarding past historical events.

They also end up learning something much more powerful than reviewing a litany of facts that are often forgotten. Students learn how to evaulate and analyze information and how to connect what might seem to be unrelated information in many various ways thereby internalizing the learning in a much more powerful way.
Posted by EHT at 6:35 AM