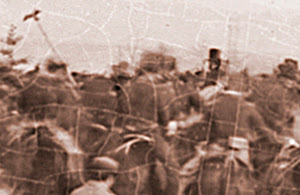 Is this a picture of President Lincoln?

According to Amy Worden of the Philadelphia Inquirer, it might be. The article is titled Lincoln photo at Gettysburg believed found.

Ms. Worden notes, "From a distance it looks like a nondescript Civil War-era photograph: Union soldiers and townspeople crowd around the grand memorial arch that marks the entrance to Soldiers' Cemetery. But zoom in closer, really close, and a startling image takes shape at the center of the crowd. A tall, slim figure astride a horse. A familiar profile. That signature stovepipe hat, a white gloved hand raised in salute. Could it be President Abraham Lincoln shortly before delivering his Gettysburg Address?"

Well, considering the date and place, this could be him. That stove top hat helps to give it away. Maybe. I guess it could have been a Lincoln impersonator.

Good job to John Richter for the find. More details are available at the article.
Posted by M at 7:33 PM