All the President's Trees 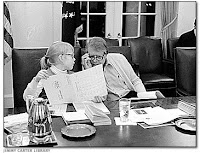 My love of quirky little facts and interesting connections that a study of history can unearth often encourages some students to attempt to locate factoids on their own. My history investigators love to surprise me, shock me, and even sometimes stump me with their findings.

It wasn’t too long ago that I was beginning my day as usual glancing over my binder of lesson plans in a feeble attempt to remember where each particular class had left off the day before and where we needed to land by the end of classes that day. One of my sweet cherubs bounded into the room and stationed himself beside me as I sat at my desk. He placed his arm rather heavily on the back of my swivel chair and I felt my chair lean back sharply. My hands reached for the top of the desk as I attempted to steady myself. I turned and sent the young man my most freezing glance over the top of my reading glasses.

I pointed down to the floor and waved him back, back, back behind the line of masking tape that had been on my carpet since I had moved into the room a few years before. I smiled to myself while I reemphasized my procedure for approaching my desk and continued to read through my plan. The young man stood quietly resting on first one foot and then the other.

Now before you think I’m a mean old teacher please understand that I had to begin an approach policy to my desk after being run over, stepped on, pushed accidentally, and nearly having my chair flipped over on many different occaisions. I had also had a few incidents with students in their excitement to be helped get into to pushing matches and slug fests over who was first. Student safety and my own survival instincts gave birth to my line in the carpet not my desire to be unapproachable.

After two or three minutes and after I thought I had made my point I removed my glasses, looked up, and smiled at my over enthusiastic student.

“Good morning!” I said. “What can I do for you?” I motioned for him to step forward.

He stood at the corner of my desk, puffed his chest out, and said, “I might know something you don’t.”

“Really?” I swiveled my chair towards him and crossed my legs as I sat back. “Well, I’m ready to be impressed. Fire when ready!”

“Well, you know Jimmy Carter? He’s from Georgia you know. He was a Senator or something…I don’t really know, but something important. Anyway, when he was President of the United States his daughter…I can’t remember her name….”

“Do you mean Amy? Amy Carter?”

He nodded vigorously and said, “Yeah, Amy. That’s her name. She was in middle school and had this school project about trees.”

“Yeah, she had to label some trees and tell what kind they were so Mr. Carter gave her permission to label the trees around the White House.”

I rested my chin on my hand and said, “Now that’s kind of neat when think about it. That must have been fun living in the White House while being in the sixth or seventh grade.”

“Hmmm….that would be interesting, but tell me more. How did her project turn out?”

“Oh, I don’t know, but apparently the President was impressed and he and Amy encouraged the White House gardners to label all of the trees on the grounds of the White House.”

I glanced at the clock. The bell to begin the day would ring in five minutes and I needed to go down the hall. I stood up and said, “I’m really impressed. I had never heard that before.”

“Wow, I knew something you didn’t.”

“Yep, you did. It’s not worth knowing though unless you share it. Thanks for telling me. Hey, where did you learn this anyway?”

“Some trivia site on the Internet. I don’t remember which one.”

“Well, remind me in class today and I’ll let you share it with the others, ok?”

My student’s effort to impress me inspired me to dig a bit deeper. I was wondering if I could very the episode from the Carter administration.

The grounds of the White House are very interesting and are as historic as the interior of the home itself. The White House homepage explains that the oldest trees on the grounds are more than like the two Southern Magnolias planted by Andrew Jackson in honor of his wife, Rachel. She had passed away before moving to the White House, so Jackson had the trees brought from his Tennessee home, Hermitage, for planting. The trees probably date between 1829 and 1837. They are still going strong.

In more recent times it has become the custom for each President to plant a tree of some kind on the grounds beginning with President Grover Cleveland. Currently there are 35 or 36 trees on the grounds of the White House that were officially planted by a President.

Our current president, George Bush, planted a Cut Leaf Silver Maple in July, 2001 while his father planted a Little Leaf Linden with the help of Queen Elizabeth II in 1991. Another interesting tree on the grounds of the White House involves an American Elm tree planted during the administration of Teddy Roosevelt somewhere between 1902 and 1906. During severe storms in 2006 the Elm came down. Take out a twenty dollar and look at the back. You can see Roosevelt’s tree on the right side.

Getting back to Amy Carter’s science project……my young man did share something with me I didn’t know. Before I posted the incident I wanted to verify the story, but have been unable to do so. It makes a nice story especially for school children who have to learn about the classification system for plants and animals, however, at this point I can’t be sure if it’s just a cute story or the real deal.

Did it really take Amy’s science project to get the National Parks Service to label the trees on the grounds of the White House? Why weren’t they already labeled? It seems like they would be. If you know anything about this incident with President Carter and his daughter please leave a comment and add to the story.

Finally, if it was really that simply don’t we all wish action from the White House could always be that swift and solution oriented?

This website from the White House Historical Society takes you to several short video clips regarding the grounds of the White House. Look for links to additional videos at the bottom of the page.
Posted by EHT at 11:11 AM

While I was doing some research for tree planting ceremonies with my tour groups, I came upon this site:

I thought it would be wonderful during a trip or on Arbor Day to plant an 'historic' tree. You might be interested in suggesting it for schools etc.

I'm from Portugal and I don't know nothing about President Carter's daughter project but as a teacher and tree lover I just loved your post. And I'm going to share it with the readers of my own blog.

Following up on Tour Marm's comment, I wanted to say that I just reviewed the Historic Trees program over on my website: